She is from their dam’s second Pure Octane litter, of three named, which included Burwana and No Prisoners, after her first, whelped in April 2008 was a very good litter, which included Commodore Drive, Elliot Tee, Positano, Praying Mantis, Rococo, Rococo Rocks and Terrific style.

She also produced winners from her other litters, whelped in July 2010 by Black Enforcer, July 2013 by Magic Sprite and April 2014 by Dashing Corsair, with a total of 18 named offspring from her five litters. 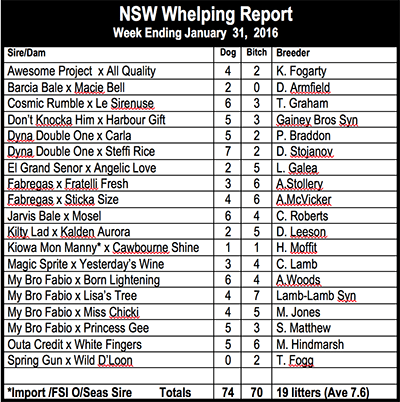 She is from a very good litter, which included Doozy, Eleben Madison, Le Burglar, Magic Earner and Sokyo, with their dam also producing winners from her four other litters, whelped in August 2008 by Hallucinate, December 2010 by Where’s Pedro, November 2013 by Magic Sprite and August 2014 by Collision.

Sticka Size is from a very good litter, which included Black Brody, Vlack Chase, Oscura, Size Does Matter and Stunning Lila, with their dam also producing winners from each of her three other litters, whelped in December 2010 by Go Wild Teddy, January 2013 by El Grand Senor and April 2014 by Barcia Bale.

Worth noting she ran 29.91 at her first attempt at 520m at Albion Park in February 2014, then more than a year later ran 30.06 there first up after a 12 month spell, which she revered from breaking her hock in six places.

She certainly showed plenty of courage on the track and given her pedigree and six bitches in this litter I would suggest there will be plenty of interest from prospective buyers with future breeding in mind.

Yesterday’s Wine is from a very good litter, which included All Strung Out, Angel’s Chorus, Anything Less and Tulare Dust, with their dam, Casey’s Angel, having a total of 51 named offspring on file from seven litters.

OUR final litter for review from the NSW Whelping Report this week, is one of eleven pups by the beautifully bred, under-rated sire, Outa Credit (November 2007 Surf Lorian x Una’s Pride).

She is from her dam’s first Elite State litter, which included Chicagee, Come On Rooster, Elite Blue Size, Hot Size, Size It Up, Stylish Hero and Two Sets All.

Their dam, Size ‘Em Up has been an very handy producer with 39 named offspring from eight litters, and in addition to a second Elite State litter, whelped in April 2010, she also produced winners from litters whelped in December 2006 by Bond, November 2008 by Deep North, July 2009 by Knocka Norris, December 2010 by Surf Lorian, September 2011 by Collision and October 2013 by Fear Zafonic*.

White Fingers raced only four times for one placing, a third over 515m at Launceston in October 2009and after suffering a serious injury at her next start, she did not race again for seven months and then only had one start before being retired.

According to my breeding records she has two litters on file with named offspring, whelped in August 2011 by Droopys Kewell* and April 2014 by Group Skater*. 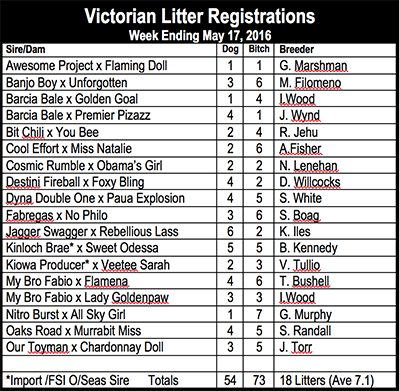 TURNING our attention to the Victorian Litter Registrations list for the week ending May 20, our first litter for review, has nine pups, by the beautifully bred stud prospect, Banjo Boy (April 2011 Vee Man Vane x Off Springer).

Unforgotten is from a litter which included Unmagical, Uno Crazy, Unsmashable, Unsurpassing and Zohan, with their dam also producing winners from her three other litters, whelped in May 2008 by Big Daddy Cool, June 2009 by Hot Chill and January 2011 by Path To Power.

On the track, she raced 37 times for six wins and five placings, winning six times over 340m up the straight on the old Healesville grass track (18.56) with four placings there and one over 450m at Ballarat.

She has produced winners from each of her first three litters, whelped in May 2010 by Run’s House, August 2012 by Cosmic Rumble) and March 2013 by Dyna Tron (including the prolific winners Hawka Tom and Unquestionable), then she has a litter of two dogs and five bitches on file, whelped in October 2014 by Nolen.

Their dam, Maiden Lee, has three other litters on file with named offspring, whelped in April 2007 by Hotline Hero, March 2009 by Black Enforcer, and May 2012 by Cool Effort.

She is from a litter of eight named which included Activation, King Odessa, Majestic Odessa, Noble Odessa, Queen Odessa, Scintillating and Suave Odessa, with their dam producing winners from both of her other litters, whelped in March 2013 by Collision and March 2014 by Magic Sprite.

The litter of one dog and seven bitches should create interest amongst prospective buyers with future breeding in mind, as they are from the beautifully bred bitch, All Sky Girl (December 2010 Global Warming x Shirley Fields), whose dam is by Droopys Kewell* x Barbie’s Shiraz (Black Shiraz x Walking Portrait) and worth recalling, Global Warming is by Brett Lee x Leprechaun Yap (Hotshot x Leprechaun Miss).

All Sky Girl is from a litter of four named, which included Antaplex, Mickey Fields and Rhythm System, with their dam’s only two other named offspring, Mercurial State and Shah’s Jewell, both whelped in February 2009, by Elite State.

Nine for the Road

OUR final litter for review from this week’s Victorian list, is one of nine pups by the under-rated, NSW based sire, Oaks Road (November 2008 Spiral Nikita* x Leprechaun Yap), whose dam is by Brett Lee x Leprechaun Yap (Hotshot x Leprechaun Miss).

Beautifully bred, Oaks Road won the Group 1 Perth Cup, Group 2 Bob Payne and Group 3 Megastar, finished second in the Group 1 Paws Of Thunder and Group 3 Canberra Cup and made the final of five other Group races.

She is from a successful litter, which included Diva’s Shadow, Go Vicki, Mepunga Brodie, Mepunga Mia, Mepunga Nick and Potsy’s Mistake, with their dam, also producing winners from her four other litters, whelped in November 2010 by Premier Fantasy* (eleven pups named), December 2011 by Where’s Pedro and August 2013 by Kinloch Brae*, then she has one named from a September 2014 litter by Mepunga Geordie.

Murrabit Miss only raced three times, unplaced each time, over 400m at Warragul, 350m at Healesville and 525m at The Meadows, before being retired and kept for breeding, which gives her a real chance to show us how good she really is, and this first litter could be very interesting and well worth following. 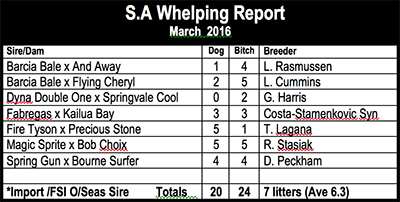 SEVEN litters were whelped and the whelping registered with Greyhound Racing South Australia during the month of March, producing a total of 44 pups at an average of 6.3 pups per litter.

We have chosen two of the litters for review, the first of which is one of ten pups by outstanding NSW sire Magic Sprite (March 2008 Brett Lee x Glamorous).

She is from a litter which included Beautiful Grace, Boojerooma, Koombooyana Kid, Mobius, Nowak and Silver Grass, with their dam also producing winners from her two other litters, whelped in December 2009 by Big Daddy Cool, and October 2013 by Magic Sprite, with all seven named winning races, so there is no doubt about the bloodlines working together.

Bon Choix raced 26 times for one win and 12 placings, winning over 531m at Gawler, where she was placed four times, with six placings over 515m at Angle Park and two over 536m at Strathalbyn.

Bourne Surfer is from her dam’s only litter, of two named, which included Bourne Lorian, who raced twice without placing.

She has one previous litter on file, two dogs and four bitches, whelped in February 2015 by Golden Easter Egg winner, Cosmic Rumble.

WATCHING Bobby Bound (March 2014 Decembrist x Disney Bound) win his fourth race in a row over 525m at The Meadows last Saturday night, prompted me to think just how little I knew about his sire.

Their dam, World’s Finest also produced winners from each of her three other litters, whelped in January 2004 by Carlisle Jack, June 2005 by Bombastic Shiraz (which included Personification and Yep, both prolific winners) then a repeat mating to Bombastic Shiraz for a June 2007 litter, with three named.

Included in his 30 wins was the 2011 Group 2 Richmond Derby, and given his strong pedigree, and strong middle distance form on city tracks, I am a little surprised he doesn’t have more offspring racing.

Maybe the emergence of Bobby Bound with four wins on end, two at The Meadows after just 20 starts might encourage some breeders to have a closer look at him. 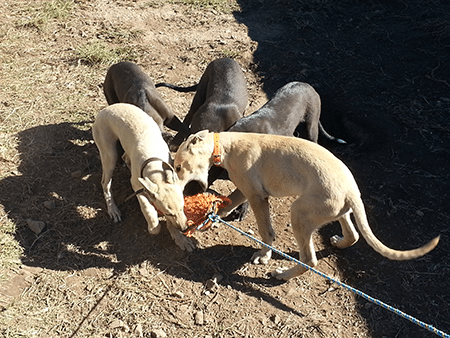 NEWS from the mailbag this week by way of an email from NSW, where Glenreagh breeder, Garry Streatfield sends news of the recent arrival of a litter of nine pups by El Grand Senor (April 2008 Where’s Pedro x Elgrando Gold).

Magic Diore, a Group 2 Maitland Cup finalist, is from a very good litter, which included Glenreagh Magic (13 wins), Glenreagh Rocket (30 wins and 20 placings), Noir Lee (12 wins, Kempsey track record) and Sprite Lee, with their dam having a second litter by Magic Sprite in January 2013 after having previously whelped a litter in April 2010 by Path To Power.

Thanks Garry for telling us about this beautifully bred litter, good luck with them, and thanks also for sending us the great photo, they certainly look keen.

COURSING this Sunday will be at Lang Lang which will be an all elimination meeting, so there will be no finals, just eliminations for the three feature events.

The Syl Doyle Puppy Championship has attracted good numbers, with 45 puppies to run off in six events, The Ray Boundy Memorial jas the full complement of 16 runners in two events, then the Gippsland Cup has 21 to run off in three events, which will set the stage for the run up to the three finals to be run on Sunday week, June 26 at Lang Lang, with coursing starting at 10.00am on both days.

FLYING SMOOTH (Black bitch, September 2014 Fabregas x Flying Machine). Followed first up fourth from box 4 over 460m at Warragul on May 17, beaten 17 lengths in the race won by Tough As Nails (26.07), with a handy 26.49 win from box 3 there on June 7. Stepped up in distance and class to 515m at Sandown (SAP) on June 12, from box four when beaten 0.11 lengths by Derail (29.91) which was an excellent run. From the Erenshaw kennel at Junction Village and you can expect better things from her shortly.

SPOOKIE ASSASSIN (Fawn dog, November 2014 Radley Bale x Saturn Assassin) Finished last from box two when having first start, over 595m at Sandown (SAP) on June 12, beaten 11.3 lengths in the race won by Penultimate (34.60). Tough assignment for him first up, and perhaps in something easier will do better next time.