The greyhound racing world is again in mourning after the sad passing of a racing legend El Galo. After a brave battle with cancer, the superstar known as ‘Flash’ passed away the same day as the legendary Bombastic Shiraz, at just 7 years old.

El Galo’s owners Seona and Jason Thompson are attempting to cope with their devastating loss, with an array of beautiful memories on and off the track to live on forever.

‘It feels like yesterday that he was still racing but it was a while ago he retired’ said Seona.

‘I remember picking him up from the airport when Dave and Christine Robartson sent him down for us to train and I fell in love with him straight away’.

‘When we had the opportunity to buy him we knew he had something special and now we have so many great memories’.

Born 15th November 2005 as a son of Where’s Pedro and Roxy Reason, El Galo won 9 of his first 19 stats around the Queensland Circuits before transferring to the Thompson family at Pearcedale in Victoria during February of 2008. Soon after, ‘Flash’ became a household name when he was sensational in winning a heat of the Group One Australian Cup, finishing runner up in the final to Tasman Queen.

It was only a matter of time before El Galo would claim his first Group race and this occurred after his Australian Cup campaign at Bendigo. The blue flyer sizzled around the one turn track in both his heat and final of the Group Two Bendigo Cup, recording a personal best of 23.65 over the 430m journey. 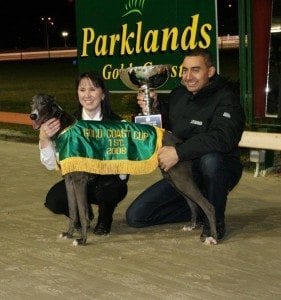 ‘Its really hard to single out a particular moment but the Gold Coast Cup was very special as it was the last one held before the track closed and the Bulli Cup because dad and I took him up for that and it was a great moment to share with him’ said Seona.

El Galo cracked his maiden Group One in December of 2008 when he saluted in the Brisbane Cup over the 520m in a flying time of 29.84. According to Seona this victory was particularly special for a number of reasons.

‘It was his 32nd win that night and it was also my 32nd birthday which made it a very special win’.

The blue ‘flash’ would string together another two Group One victories within the space of a month at the beginning of 2009, braving a late surge by hometown hero Scull Murphy in the Group One Adelaide Cup, clocking a sizzling 29.45 and backing up just two weeks later to blow his rivals away in the coveted Temlee invitational, recording an impressive 29.80 at The Meadows.

El Galo’s prize money tally sat at an astounding $519,380 when he retired during July of 2009, after finishing third in the Group Two Bob Payne Winter Stake final at Wentworth Park. His career statistics stand at an impressive 44 wins and 19 minor placings from just 71 race starts.

Loved as much off the track as he was on it, Seona emphasises how the Thompson kennels just aren’t the same without their special family member.

‘One thing I remember was at feeding time he would stand there and lick the gate. It used to bug me but after everything he did for us I just got used to it. Now at feed time it just isn’t the same without him standing there’. 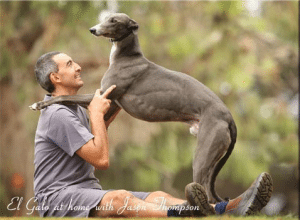 One touching legacy that will live on forever is the offspring that will carry the famous El Galo genes for generations to come. Commencing stud duties after his retirement, as expected he has already produced some outstanding greyhounds in his short breeding career. Thompson’s own superstar El Brooklyn is his most successful offspring to date, a two-time group winning bitch, earning almost $290,000 in prize money.

As we mourn the loss of another champion of the sport, it’s important to embrace the memories we have of El Galo, the impact he had on the sport on and off the track and what foundations he paved for future superstars. The greyhound we all loved as ‘flash’ deserves nothing less than to be remembered as one of the best.