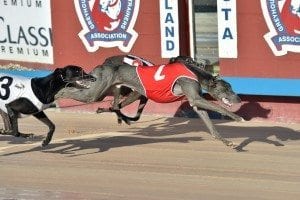 VICTORIAN speedsters Big Ticket and Aston Bolero are the equal favourites to take out this Friday’s Group 2 Maitland Gold Cup following on from their equally impressive performances in the Hunter Valley last week.

Rated $3.50 shots with online bookmaker Bet365, Big Ticket has drawn the more favourably of the two, having come up with box three in the $36,000-to-the-winner feature.

The son of Fabregas and Bella Portrait is a winner of 23 of his 42 starts and was dominant in his heat performance last Thursday, barging his way through the pack in the early stages to assume the lead and sprint clear to score a 24.82 win.

Big Ticket is the class runner of the series will be aiming to break through for a deserved group victory in the event, having already placed in the Horsham, Warragul and Shepparton Cups and qualified for the Group 1 Hobart Thousand. Will Friday finally be the day?

Alternatively, Aston Bolero is poorly drawn in box six but remains right in contention after posting the fastest first sectional last week – a flying 7.69 off box two. The black and white chaser also comes from one of the most successful kennels in the country, with Jason Thompson sure to have him firing ahead of the final.

Young chaser Marbo’s Magic is just behind the top two picks at $3.80 and comes into the race having won 10 of his 11 starts to date. Trained by Paul Braddon, the son of El Grand Señor and Willow Blaze will have to overcome box five to score, the same box he used to register a blistering 24.80 heat last week.

Ritza Lenny (pictured) is an emerging talent and is ideally positioned in box two. The blue greyhound had to do it tough in his heat last week, coming from behind to score in a fast 24.90 for trainer Mark Gatt, with Bet365 installing him at $6 in the wide open affair.

The fifth runner under double figure odds is Bob’s Uncle. After starting from the inside he bounced back from a last start defeat to win his heat in 25.03. Trained by Jimmy Mcglinn, the 34 kilogram powerhouse has developed a cult following around the local area, with his chances of securing the win greatly enhanced by drawing the coveted one alley.

The Group 2 Maitland Gold Cup is race eight on the card this Friday night and is set to jump at 9:38pm.

“Freakish greyhound which would set the world on fire if he could ever begin. Has drawn a decent box for the first time in his short career and if he can hold his spot on the fence in the run to the first turn then he may be able to rail underneath any congestion in a race which is packed full of speed.”

Odds to win the Maitland Gold Cup: $8 with Sportsbet

“Blessed with a heap of ability and is well drawn on the inside. Last week he secured a tough win coming from behind. Box manners are the only query moving into the final. Definitely fast enough to win the race but will need to come out a lot better.”

“Absolutely smashed his rivals in his heat when clocking a flying 24.82 off box four. He showed good early pace and if he begins similarly he should be up near the front early. The best thing about this fella is he is a huge 38 kilogram beast – he will have no hesitation barging his way to the front and he is near impossible to run down when on the bunny.”

“Very consistent greyhound but his lack of early toe makes it very hard tonight from the middle box.”

Odds to win the Maitland Gold Cup: $21 with Sportsbet

“Fastest qualifier heading into the final who clocked a dazzling 24.80 off an identical draw in last week’s heat. Has brilliant pace once he hits the ground but he can’t afford to dwell at all with a stack of speed on his outside.”

Odds to win the Maitland Gold Cup: $3.80 with Crownbet

“Clocked a blistering 7.69 to the first mark last week but has not fared too well with the box draw. The runners in the middle are fairly evenly spread when it comes to early pace, but if he can outpace the seven and the eight he should get plenty of room to move and swoop around the field.”

“Has been racing against good company in consistent form and was far from disgraced when beaten here last week, clocking 24.92 in his heat. Fair bit of speed in this race but he appears well drawn off the track as he should stay out of trouble out wide.”

Odds to win the Maitland Gold Cup: $18 with Sportsbet

“Needs to find a bit on the clock based on his 25.11 heat win, but is still learning and has plenty of upside. Box eight is a great box to have at Maitland as many of the inside dogs tend to jam up early, giving the outside runners a chance to circle the field and get on the bunny. He is going to be big odds but I think he is worth an each way ticket.”

Odds to win the Maitland Gold Cup: $31 with Sportsbet

“Bit stiff not to make the final after running 24.93 when beaten in his heat by Ritza Lenny. Would be a rough chance if he gets a run, particularly if he draws the inside.”

Odds to win the Maitland Gold Cup: $17 with Crownbet

“Yet to win here in three attempts but remarkably has broken the 25 second barrier twice when running second. Needs to find a bit early to be competitive in a race such as this.”