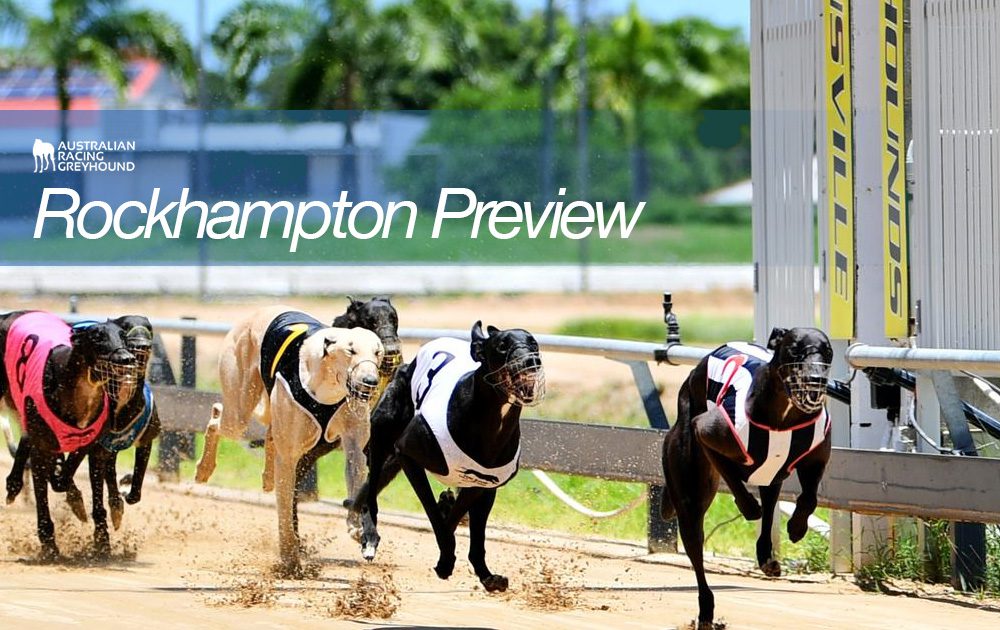 We head to Central Queensland on Friday night for a full card of 12 races at Rockhampton. Find out who we’re backing.

We start the day off with the Life Members Maiden Final over the Rocky 407m. Two heats were contested on April 13 with the first four greyhounds past the post qualifying for today’s final. Heat winners were Genius You from box five and Ring Me from box three. The Ken Boody-trained Ring Me (box 4) was very impressive winning on debut, clocking a quick 23.79 seconds. This daughter of Keybow smashed rivals by over seven lengths and a repeat of that performance would win this final. The Rob Weeding-trained Unify (box 3) ran second to Ring Me from box eight when on debut. This daughter of Fernando Bale should be better placed from this lower draw; expect improvement today, she could run second again. The Darren Taylor-trained Genius You (box 7) improved from his debut start at Rocky when unplaced, winning his heat in a moderate 24.74 seconds. This son of Barcia Bale could improve again and be in the finish. Raven On Koby (box 1) is a son of Surf Lorian and is the other Boody chaser in this final. Wearing the red rug is a good advantage in any final, and he may be another improver.

The Clinton Thompson-trained Dr.Kammi (box 7) might be the greyhound to beat in this novice race. With slow beginners drawn inside and outside of her, she should get clear galloping room and is suited by a wide draw. Nomad Road (box 3) is normally a slow beginner but can run home hard, given clear running down the back straight. Suited It (box 8) is currently in good form, finishing second in his past two starts in novice races. Better suited from an inside draw but can be in the finish if breaks go his way early. Goody Goody Yum (box 1) finally won her maiden race on April 6 from box one, after numerous second placings. Could get a good run early as this race looks devoid of early speed.

The Neville Jackson-trained County Mist (box 2) was unplaced in a 4th/5th Grade race behind Five Putt Cal from box five on April 13. Back to a 5th Grade-only race, she looks better suited today and her previous form was good. The Clinton Thompson-trained Zipping Raven (box 3) missed the start when wearing the red rug April 6. Better suited from a middle draw, she looks one of the main dangers today. The Dallas Beckett-trained Francis Geoffrey (box 8) has won both of his starts from this wide draw. Should be included as a winning chance today. Tokyo Chief (box 7) is better suited from an inside draw but can run home well if given galloping room down back straight. Cannot be left out of exotics. Kooky Loopy (box 1) does not win many races but can be a place chance from this great draw.

The John Catton-trained Busted Axel (box 2) looks the greyhound to beat here. Making his Rockhampton debut today but looks to have the class edge on most of these greyhounds. Can show early speed and has won 13 of his 50 career starts. Lines (box 3) was unplaced from box five at his last start here on April 6. Prior to that run, he was in good form and he likes inside draws. Clinton Thompson now trains Dwarshuis (box 1), who looks an interesting starter. This former Victorian could be better suited to Central Queensland racing and is one to respect from this good draw. Forever Words (box 5) was a poor run last start from box one when finishing tailed off March 23. Previous form was good, expect a better run today coming off a four-week break.

This is the first of four Rockhampton Cup heats today. The first two past the finishing line in each heat progress into the $60,000 Cup final on April 29. Tony Brett brings young gun Milligan (box 3) up the highway from Brisbane for his Rockhampton debut, although he has already won 10 races from 13 career starts. Young trainer Jedda Cutlack has Mitchell Street (box 2) entered in this heat. He contested heats and made the final of the Wentworth Park Golden Easter Egg. Obviously in good form, has good early speed and has won at Rockhampton, clocking a sizzling 29.77 seconds back in April 2021 from box five. Leading trainer Ken Boody has Wink At Me (box 6) in this heat. He looks the best winning chance of the local greyhounds, even from this tricky draw. The Peta Boon-trained Velocity Tamika (box 1) likes wearing the red rug and could be a place chance from this great draw.

The second Rockhampton Cup heat looks a tricky race to assess. The Matthew Heilbronn-trained Dulceria (box 4) is making her Rockhampton debut but might be the greyhound to hold out in this heat. This daughter of Zambora Brockie is not normally a fast beginner but does run home hard. Tony Brett has Bogie Bandit (box 3) entered in this heat. Has won 20 races from 58 career starts but yet to win further than 431m, so may struggle to run out the Rocky 510m. Jedda Cutlack has entered Strategise (box 8) in this heat. He is also making his Rockhampton debut and would prefer an inside draw. Can run home well if breaks go his way early. Leading local trainer Ken Boody has Dixie Gambles (box 2), who is in good form and can show early speed. Looks the best local chance in this heat. Pinto Falabella (box 5) made his Rockhampton debut on April 13 when a close second behind Dixie Gambles from box five. Should be improved today and is one for the exotics.

Showdown (box 1) makes his Rockhampton debut for trainer Jedda Cutlack. He wears the red rug tonight and looks hard to beat. Comes here with two good second-placings at Ipswich behind the smart Extra Malt. The Dallas Beckett-trained Canary Wharf (box 8) looks the best winning chance of the local greyhounds in this heat. Has won five times over this track and distance and never been unplaced in all 11 starts here. The Tony Brett-trained Just A Sort (box 6) makes his Rockhampton debut today. Has won 10 of his 29 career starts. Has a tricky draw today but can show early speed. Ken Boody has two greyhounds in this heat – Deadly Choice (box 4) and Blue Jeans Talk (box 5). Both have tricky middle draws, but Deadly Choice may be his best chance today. The Robert Jacobsen-trained Capture Bart (box 3) was an impressive winner when making his debut here on April 13. Is the oldest greyhound in this heat, over four years of age, but could sneak into a minor placing.

This is the last chance to qualify for the Rockhampton Cup. Ken Boody has local champion Love You Peaches (box 1), who has been freshened in preparation for this heat. Should hold the early lead from this great draw and be hard to run down. The John Catton-trained Little Byrnes (box 3) makes his Rockhampton debut today. Has won 21 races from 58 career starts. Could get a good run today from his low draw and looks a danger. The Trevor Lindsay-trained Hearts Colliding (box 5) was an impressive winner on April 6 when making her Rockhampton debut from box two, clocking a fast 29.99 seconds. Has a tricky middle draw today but must be included in the winning chances. The Robert Ayres-trained I’m Explosive (box 4) also makes her Rockhampton debut today. Has a tricky middle draw in this heat but can rip home when given clear galloping room. Could qualify if breaks go her way early in this race. Tony Brett has What A Debacle (box 7) entered in this heat. This veteran greyhound, over four years of age, has won at Rockhampton previously in slick time. May struggle to beat some of these greyhounds from this wide draw. Looks one for the minor end of trifecta betting.

This is the first of three Dinky Di Web Design 4th/5th Grade semis over the Rocky 407m. Seven heats were contested here on April 13. The $4,700 final will be held during the Rockhampton Cup meeting on Friday, April 29. Ken Boody has Barely Friendly (box 5) in this semi. She recovered to win her heat after missing the start from box three. Has a tricky middle draw but still looks the greyhound to beat. Clinton Thompson has three greyhounds here – Rosa’s Gold (box 1), Dr. Xena (box 7) and Exit Plan (box 8). Rosa’s Gold finished second behind Five Putt Cal in her heat from this good draw. Must be a good chance to qualify into the final. Exit Plan (box 8) would prefer an inside draw but is currently in good form, winning his heat in a fast 23.76 seconds from box three. The Darren Taylor-trained Mia Magic (box 2) could get a good run early from this low draw. One for the exotic betting.

This looks the strongest of the three semis, with three heat winners drawn alongside each other. Of those, Adam McIntosh-trained Inner Tea Cup (box 2) has the best low draw. Was a good heat winner, beating Shian Ned from box three in quick time. Looks the greyhound to beat in this semi. Five Putt Cal (box 3) was the fastest heat winner, clocking 23.61 seconds from box eight. Could get a good run early outside Inner Tea Cup and be a big danger. Shian Ned (box 7) has finished second at his last four starts over this track and distance. Would prefer an inside draw but did run second from the same draw in his heat. Velocity Cazau (box 4) won her heat when wearing the red rug. Will need early luck to qualify from this tricky middle draw. Rosa’s Kitchen (box 1) looks Clinton Thompson’s best hope in this semi. Wears the red rug but only looks a place chance at best.

This the last of three semis. The first two over the finishing line in each semi qualify for next week’s final, along with the fastest two third placegetters. Trainer Clinton Thompson has the good fortune of drawing the coveted red rug in all three semis. Rosa’s Memory (box 1) was a good heat winner from box eight. Could hold the early lead today from this great draw and be the greyhound to beat. Tuesday’s Gone (box 6) ran well when finishing second behind Exit Plan from the same tricky draw. Looks the main danger if she gets across early in this semi. Jackie Dee (box 8) is currently in good form. Finished second behind Velocity Cazau in her heat from box five. Handles wide draws and can qualify into next week’s final. Thompson also has Blazing Norman (box 2) in this semi. This big greyhound was luckless in his heat behind Inner Tea Cup from box six. Should get a better run today from this good low draw. Has never been unplaced in six starts over this track and distance, so must include him into all exotics.

This is our Masters 5th Grade race to finish off this excellent card of greyhound racing. The Christine Pollard-trained After All (box 3) has not raced since November 10 last year. Drops back into Masters class racing today and might be primed for a first-up victory. Fluro Fella (box 7) and My Bro Beach (box 8) contested the Dinky Di Web Design heats on April 13. Both greyhounds failed to qualify into the semis but were good runs when unplaced. Fluro Fella was placed in both of his previous two starts over this track and distance. Looks a good winning chance today. The Darren Taylor-trained My Bro Beach would prefer an inside draw but looks a good place chance here. The Gary Weeding-trained Electron Kev (box 1) loves wearing the red rug. His last two wins at Rockhampton have been from this great draw. Must be a winning chance. Maybe a good race to take a boxed trifecta.