LEADING Queensland conditioner Tony Brett couldn’t wipe the smile off his face after landing the quinella in the Group 1 Brisbane Cup (520m) at Albion Park on Friday night.

The thrilling decider saw powerhouse performer Thirty Talks (box three) defeat Zabdon Ferrari (box two) by half a length on the line, with the winner clocking a blistering 29.57 – just 0.06 seconds off the track record.

Brett said he was expecting Thirty Talks to take the lead much sooner after lobbing straight behind Zabdon Ferrari in the early stages, however it took the brindle greyhound until half way down the home straight to hit the front.

“I couldn’t have scripted it any better,” Brett told Australian Racing Greyhound.

“Down the back I thought Thirty Talks would reel (Zabdon Ferrari) in and go straight past him, but when it took him so long to get to him I knew they were humming along.

“After the race you look at the sectionals and Zabdon Ferrari ran times that would win you 999 out of 1000 races.

“You do feel a little bit sorry for (Zabdon Ferrari) – but his chance will come.

“I am truly blessed that I am able to train both of them – I just love watching good dogs run.

“To see the two of them race pretty much untouched and out there doing what they did – it is very humbling as a trainer.” 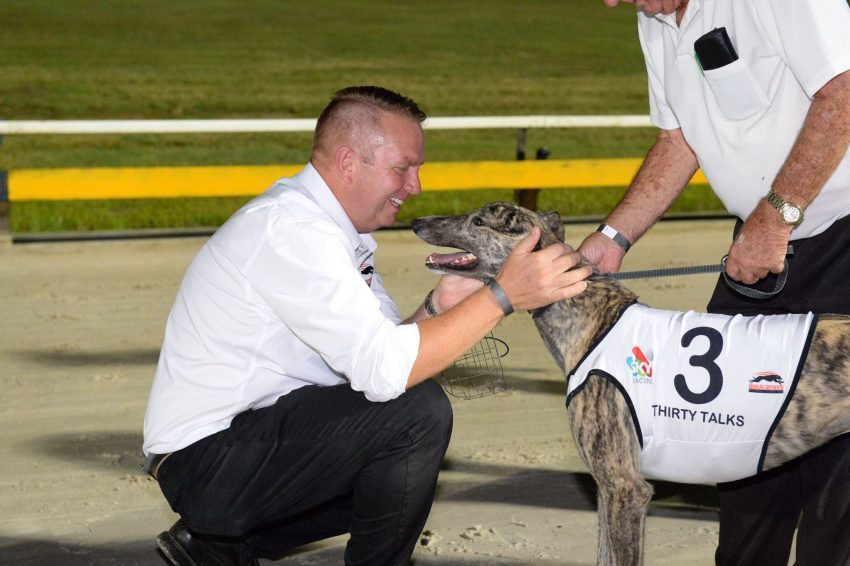 Thirty Talks took his career record to 21 wins and two minors from 33 starts, while the winner’s cheque also bolstered his prize money earnings above the $276,000 mark.

Brett said the most rewarding part of the victory was seeing the enjoyment from the dog’s owner, Lenny Antonio, who purchased the son of Where’s Pedro and Unfinished from the 2014 Richmond Riches Puppy Auction.

“As a trainer there is nothing better than seeing the enjoyment an owner gets out of the dog,” Brett said.

“Lenny has realistically come back from the brink of death – when he went down to the Richmond Puppy Auction to buy a dog he was skin and bones.

“To see him go from that to where he is now – getting around with the rug on his shoulders last night – he is living life to the fullest and enjoying every moment of it.

“The greyhounds have rejuvenated him – he would be the first to tell you that his dogs have given him the spring back in his life.”

Brett said Antonio has never lost faith in his star chaser, despite plenty of people questioning his judgement after buying him for $30,000 as a youngster.

“When he rung me on the way home he told me he had bought a Melbourne Cup dog,” Brett commented.

“It’s safe to say I was glad he wasn’t dealing with my money, but looking back now he seems like a pretty cheap buy.

“To his credit, Lenny never lost faith in him and now Packer has re-paid him – you sit back and you just can’t believe how much of a fairytale story it is.”

The triumph was also a major milestone for Brett, giving him his 15th group 1 win and his third Brisbane Cup title, making him the race’s most successful trainer alongside Jason Thompson.

“We were walking dogs this morning and it really hit me,” Brett said, “The run we have had has been amazing and we are very thankful.

“You can never take (group 1s) for granted, they are hard to come by and it takes a lot of hard work to get the dogs there.”

As for the future plans for his star duo, Brett said Zabdon Ferrari will be having a short freshen up, whilst Thirty Talks may be aimed at the upcoming Group 1 Silver Chief Classic (525m) heats at The Meadows on Christmas Eve.

“If Thirty Talks could perform well in the Silver Chief series that would virtually guarantee him a spot in the Temlee and then it would be on to the Australian Cup.

“But we still have a week to think about it, at this stage we are not sure if we will bypass it – he is only young and there are still plenty of races coming up for him in the next year.”