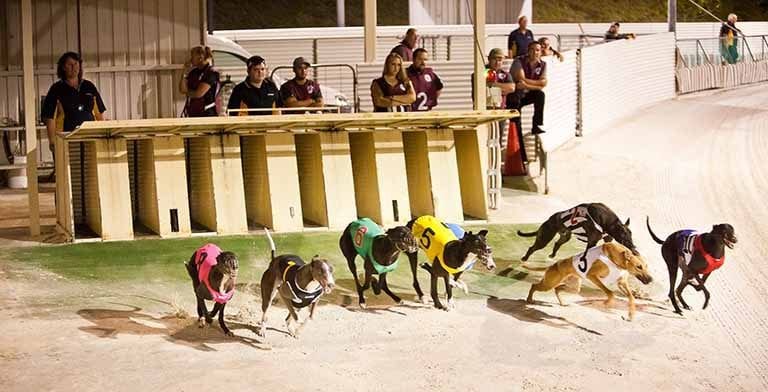 Cannington greyhounds tonight hosts three heats of the 2020 Group 2 WA Derby for the age restricted male greyhounds. While COVID-19 has played havoc with other states group and listed greyhound racing schedule, WA has forged ahead relying on the local depth of chasing talent.

Chris Halse has had a mortgage on the event in recent years providing local victories in 2018 and 2019 with West On Augie and Premium Share. This year Halse will line up with five chances spread across the three heats, with Sir Monty, Bust Or Boom, West On Axel, Fernando Star and West On Olvee.

In fact local greyhounds and trainers have dominated the age classic race in recent years despite the race being targeted by many of the elite interstate greyhounds. Enzo Crudeli provided 2017 winner Sassy Ginger, having won the race the previous year with Shell Shocked. Lexia Isaac and Mick Pollard won the 2015 version of the WA Derby with Fun Boss. Lexia Isaac does not have a runner contesting the 2020 version of the race, while Crudeli will line up with Brankstone’s Boy as his only hope.

The last interstate victory went to Tiggerlong Amigo trained by the now disgraced Darren McDonald. This year sees a vastly reduced interstate contingent vying for the Group 2 WA Derby title due to travel restrictions brought on by the coronavirus pandemic.

Victorian trainers Matthew Clark and Glenn Rounds are the sole interstate trainers to have runners. Clark will have Catch The Thief as his sole representative, while Rounds will start Amarillo Highway and Aeroplane Eric.

With just the three heats, all winners and seconds plus the two fastest third placed dogs will progress to the $40,000 final next week.

Heat one of the Group 2 WA Derby sees just seven starters and the Victorian greyhound Catch The Thief looks well placed off box one to take the race out. Clark brought the greyhound over a week early to get a look at the Cannington track under race conditions, and the greyhound did enough to win at his WA debut holding off Sir Monty in 29.76 best of night.

Catch The Thief raced like a greyhound having his first look last week despite winning. He missed the start slightly from box seven and ran the entire race two greyhounds off the fence. Sure to be improved from the run, Cath The Thief looks the winner of heat one with his only risk being his tendency to be a little slow from the boxes. Although with the aid of the rail, he should be able to charge through in the run to the post the first time and prove too good.

Sir Monty from box seven again looks the best hope to test Catch The Thief and should progress to next week’s final. Buster The Brute has enough early pace to sit off Sir Monty and get clear running to figure in the placings.

Sir Monty to run a place appeals as the best play in the race given the poison odds on offer about the likely winner.

Heat two of the WA Derby is an all local affair, and again the early pace looks to set three of the chances clearly above the other contenders. Hot young prospect Tommy Shelby has won nine of his 10 starts here at Cannington over this trip and was first up for eight weeks when winning last week in 29.80, just outside Catch The Thief’s 29.76. The Steve Withers trained greyhound is unbeaten from the four inside boxes and should easily lead this field and prove too strong in the run home.

Chris Halse will get his chance to win another WA Derby with Fernando Star who starts from box seven tonight. The son of Fernando Bale has the early pace to race up outside Tommy Shelby through the first half of the race and should hang on for second. Zack Monelli who at times can be legless early in his races, is well placed out in the pink box to get a position in running and motor late at Fernando Star. If the two leaders interfere with each other, Zack Monelli will be right there ready to pounce.

Tough betting race with our three chances clearly leading the market. We are being asked to take unders about Tommy Shelby to win heat two, with only $1.80 best price fixed on offer right now. Fernando Star is being sent out at $3.50 and $1.70, while Zack Monelli is priced at $4.80 and $2.20 best odds.

Based on the odds on offer Zack Monelli is the likely value in the race and capable of taking out heat two if there is any trouble in running. With the race only paying two place dividends your best betting angle is to play light on the win and and heavy the place.

Werewolf Monelli is hit and miss at the start of his races and has been racing down on form since back to back wins in March. Despite going winless at his past five starts, he is capable of reversing that form loss tonight having drawn where he prefers out wide on the track. On best form, his early splits would lead this field easily.

Redcap Monelli sets up nicely to boot up inside the speed to his outside and hold the all important rails running though the first corner behind the leaders. Very strong to the line, Redcap Monelli is almost a moral to line up in next weeks final as he will get the run of the race and finish off stronger than the others to claim a top two placing.

Victorian visitor Aeroplane Eric has the pace to either take advantage of any early trouble, or get caught three wide in the run to the fist corner and suffer trouble. His chances will be decided by Werewolf Monelli early. Brankstone’s Boy looks best of the rest.

Bookmakers have really wound out Werewolf Monelli’s chances offering us $10.00 and $3.60 best price fixed odds. For a greyhound we have priced at $3.15 this race is a no brainer – you are getting massive overs and you have to be on at the price. Yes there is a risk he will not reverse the form slump, but that risk is priced in and more at $10.00.

We have Redcap Monelli priced at $4.50, Brankstone’s Boy $5.00 and Aeroplane Eric at $4.00. At the prices Brankstone’s Boy presents as the only other possible bet outside Werewolf Monelli, with $11.00 and $3.80 available.