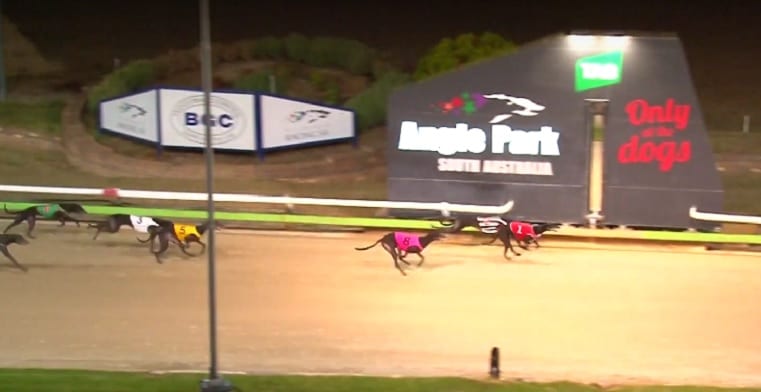 The fourth running of the Leigh Rogers Grade 6 Feature final was conducted tonight at Angle Park in cold conditions with Fly For Trix for Jane McNicholl making it four wins in a row when he led throughout in dominant fashion to claim the $6,000 first prize.

Another excellent line up greeted the starter after five terrific heats were conducted last week however the punters felt there was only one winning chance with Fly For Trix starting a short priced favourite. As the start was affected the punters were feeling pretty happy with themselves when the son of Fernando Bale and Weblec Rose pounced on the early lead at the winning post on the first occasion as he drove hard along the inside of Gold Flyer for Lisa Rasmussen which began smartly and challenged for that position. Snakebite Me for Ben Rawlings quickly moved to third as the other runners tried to find their positions in behind.

Turning for home and Fly For Trix was in no danger, careering away from his rivals in brilliant fashion. He went down to the line an easy 7 ¼ length winner from Gold Flyer who battled on really well to just finish second ahead of Zipping Marshall while Rouge Planet charged into fourth. It was all about the winner however as he posted a sizzling 29.45 victory with splits of 4.40 and 16.72 for the 515m journey.

Fly For Trix which is locally bred and owned by Jane now has the imposing record of 12 wins and 3 placing’s from just 18 starts and career prizemoney just under $20,000.

Leigh’s wife Rachel and three young daughters were on hand to present the winning trophy to Jane McNicholl however in a touching moment Jane presented the trophy back to the girls as a memory for them with the race named in their dad’s honour.

GRSA introduced this race onto the feature race calendar three years ago in recognition of the former long time Food and Beverage Manager, who lost his battle with a rare form of cancer four years ago. Also on hand were more of Leigh’s family, friends and work colleagues in support of Leigh with many travelling long distances again to share in tonight’s event.