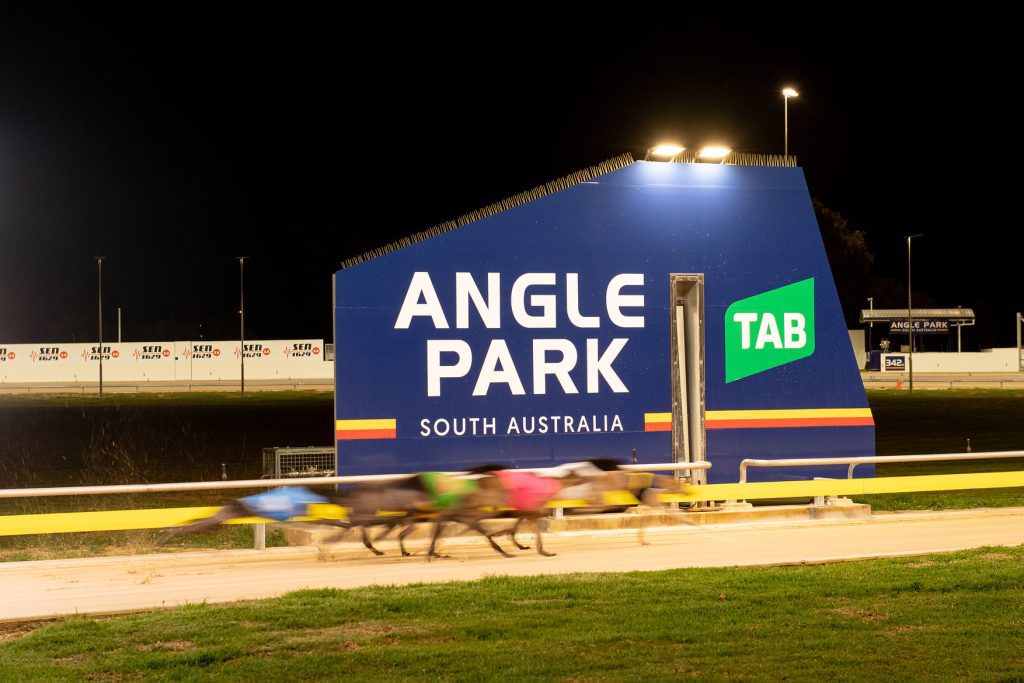 The 2022 SA Bred Doug Payne Feature was run last Thursday night at Angle Park in warm, humid conditions with trainer Kirin Corby taking out her fourth edition of the series when high speed sprinter Harbor Blues was able to lead throughout for a stirring victory.

Kirin previously won this race in 2003 with gun sprinter Lion Hearted, in 2008 with Cool Keepsake, and with Fabwik in 2018; no doubt targeting this race with her South Australian bred sprinting stars over the years.

The son of Worm Burner and Harbor Missing was sent out on the third line of betting behind litter mates Victa Grosso and Victa Haydn for Tony Rasmussen. As the start was affected Harbor Blues bounced out of box two to quickly assume the lead with the third of the litter mates, Victa Kurt for Lisa Rasmussen ranging up alongside as they headed out of the front straight.

The third of Tony’s runner’s Hot Spartan was positioned nicely in behind while Victa Grosso found a nice spot in fourth but ran wide on the first turn losing valuable ground. Into the back straight and Harbor Blues was low flying in the lead with Victa Kurt doing a good job to stay in touch in second. Hot Spartan moved to third while Victa Haydn moved to the inside of Victa Grosso a long way of the lead while rounding out the elite six was Archman for Petar Jovanovic who brought up the rear.

Off the back straight and Harbor Blues was looking like the winner with Victa Kurt holding a strong second. Hot Spartan was beginning to the challenged for third by Victa Haydn and Victa Grosso who were both motoring home.

Turning for home and Victa Kurt raised one last challenge to Harbor Blues however he was unable to close the margin with Harbor Blues going on for a brilliant all the way win. Victa Haydn charged down the outside to grab third while Hot Spartan just held off Victa Grosso along the inside for fourth.

Doug Payne is one of only three South Australian’s inducted into the Greyhound Clubs Australia (GCA – ex AGRA) Hall of Fame and is recognised as an icon of SA greyhound racing. He was a true ambassador for the industry winning the first three Adelaide Cups in 1972, 73 and 74 in addition to winning 14 training premierships.

GRSA sad “It was an absolute pleasure to have some of Doug’s family on course again this year with three generations in attendance with Carolyn, Rachel and Doug’s great grandchildren Evelyn and Xavier who presented the rugs and trophy to the winning connections”.