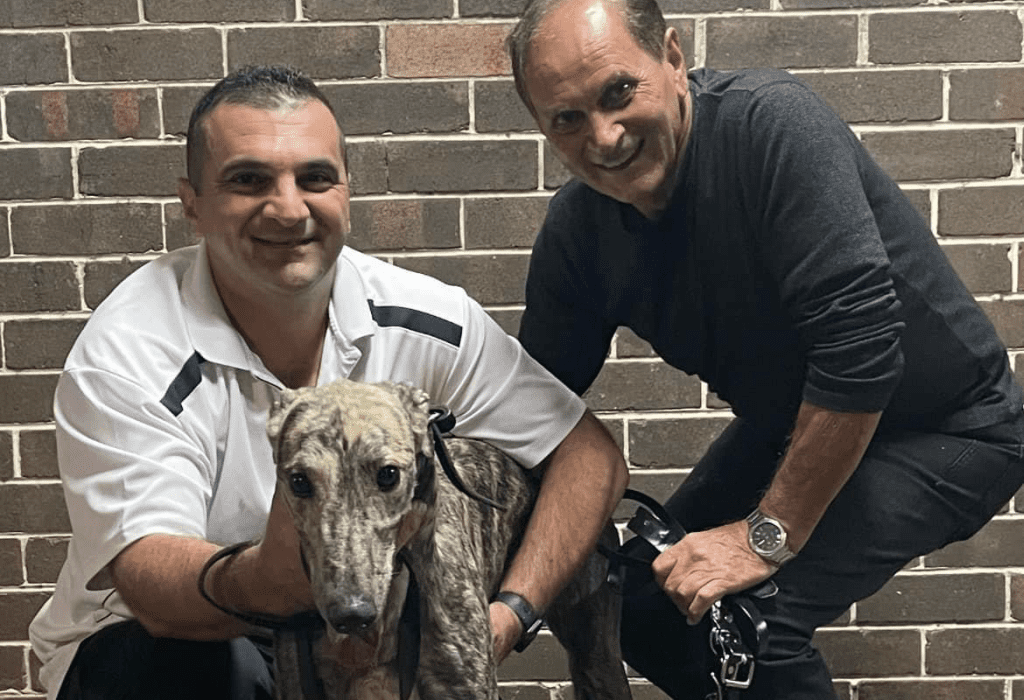 New South Wales greyhound trainer James Cortis was duly rewarded on Saturday night at Wentworth Park for his efforts in juggling his business commitments with his passion for training, after Hardman Cortis saluted for the third time in nine days.

The beautifully bred son of Fernando Bale and Nangar Miss commenced his winning run at Goulburn on the 14th of April in 24.78 over the 440m, before saluting at Gosford 5 days later over the 515m in 29.64.

He completed his three-peat with a brilliant come-from-behind victory at Wentworth Park last Saturday night.

“He hasn’t surprised us, because he’s always had the ability, since I got him from Mick Hardman” said Cortis.

“When I took him down to Bulli for the first time and trialled him, he went something like 26.4 and thought what the hell have you given me here, it was very quick for a trial.”

It hasn’t been all smooth sailing for Cortis and his talented charge, after a trip to the city back in February this year resulted in the 32kg chaser sustaining a hairline fracture to his hock.

After resuming training after a 15 year absence to concentrate on his business; Cortis nursed him back to health and took him to different tracks upon the advice from Michael Eberand to aid the dog in gaining confidence.

“I called Tony Spiteri and he didn’t answer, I rang Mick Eberand with no answer, Mitchell Pryce didn’t answer and finally Michael Hardman actually answered his phone and I said, what do I do?”

“He’s from the same litter as Analyzing and Chase Me Honey and one thing I know about the breed, take them somewhere first up – even if they’ve been there previously if they haven’t been there for a while, they seem to fly.”

“Upon that advice I thought bugger it, I’m going to nominate for Wentworth Park and yeah came out and surprised us; but he is a very strong dog and down the track I reckon he’ll get to 600m like his sisters.”

Cortis has always been involved in the sport from an owner’s perspective and has previously purchased one or two pups from litters bred by renowned participant, Michael Eberand.

“We’ve had a couple of decent dogs but my young bloke was 12 or 13 when we moved to Catherine Field, if we move onto acreage, I’ll start training dogs again and he got really excited.”

“My wife had to have open heart surgery and it put things into perspective for me and I wanted to enjoy it a little bit more and not spend so much time at work.”

Cortis reiterated the challenge of training greyhounds and juggling his commitments in running a business is extremely difficult, however the support and friendships made with fellow participants to lean on for advice is something he doesn’t take for granted.

“Mitchell Pryce and Sarah Easey are the most beautiful people I’ve met in my life, they’d take the shirt off their back for you and every time I ring him for advice, he just tells you everything.”

“Even my son said everyone is so nice. Majority of people in the industry are really nice people and you’ve got to ask them the questions and they’ll give you the answers.”