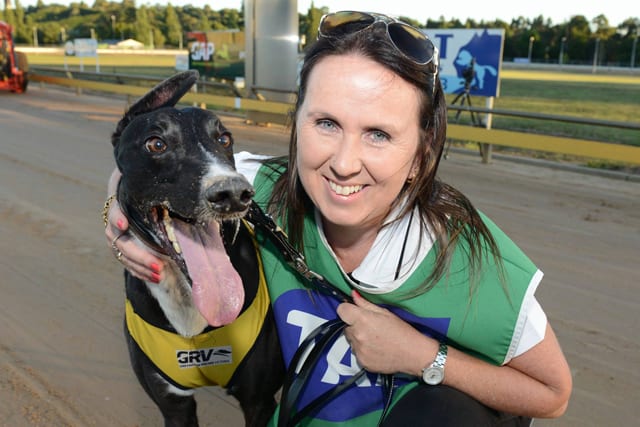 Leading Victorian greyhound trainers Seona Thompson (pictured) and Samantha Grenfell will face the Victorian Racing and Disciplinary Board (RADB) on Tuesday July 9 on charges of presenting dogs to race with prohibited substances in their systems.

Seona Thompson, who is currently sitting third by winners in the Victorian metropolitan training records, and fourth in the state wide records; hasn’t started a greyhound to race since the first week of May.

Her partner Jason Thompson hasn’t started a greyhound since April 2017 when he was disqualified for three months for refusing to allow GRV Stewards to conduct an out of competition swab on his greyhounds Dalgetty and Aston Bolero.

The high profile training partnership has recorded 163 wins at an incredible 41% strike rate of starters to winners this season. This is easily the highest greyhound training strike rate in Victoria, and also nationally for any kennel with over 200 starters.

Seona Thompson has been charged under GAR 83 (2) which reads:
83 (2)The owner, trainer or person in charge of a greyhound-

shall present the greyhound free of any prohibited substance.

The RADB hearing notes disclose that the GAR 83 (2) charges relate to “failing to present the greyhound Fab Reiko free of any prohibited substance for an event at the Warragul meeting on 2 April 2019”. On the night in question, the greyhound was the subject of a pre race swab test before recording a two length win as $1.40 favourite. Fab Reiko is owned by Victorian thoroughbred jockey Jarrod Fry.

Industry rumours have abounded since the abrupt cessation of training from the Thompson kennel, and these rumours have continued to be fuelled by what would appear to be a lack of transparency from Greyhound Racing Victoria (GRV) Stewards around the matters.

To add further intrigue, one half of the partnership of another top 10 Victorian greyhound training partnership is facing the same or similar charges; with the same degree of non disclosure surrounding them.

Samantha Grenfell, of the powerful Avalon based Grenfell kennel is also facing a charge under GAR 83 (2) for “failing to present the greyhound Oster Bale free of any prohibited substance for an event at the Geelong meeting on 22 March 2019”. On the night in question, Oster Bale was also the subject of a pre-race swab before winning by 1.5 lengths at $2.10. Oster Bale is owned by NSW greyhound owners and breeders, the Wheeler family.

Samantha Grenfell has not started a greyhound since May 9, 2019, although Correy Grenfell continues to train prolific winners including Group 1 Harrison-Dawson winner Orson Allen as recently as May 24, 2019, winning $150,000 in the process to take the dog’s career earnings to $605,520 for connections.

It was a good night for the Grenfell’s who took out another of the feature greyhound races, the TAB Cup Night Stayers feature with Dyna Chancer.

Accusations of inconsistent treatment of participants by GRV and GRV Integrity in cases of high profile participants would appear to have some validity given neither GRV nor RADB have publicly identified the substances involved or the actual details surrounding the inquiries.

A quick look at the GRV Stewards Inquiries and RADB hearings appears to confirm that other lesser known participants have not enjoyed such privacy or non disclosure. For example, it is apparent to all that trainers Vince Tullio and Gregory Barry will be facing RADB hearings under the same GAR 83 (2) rule, and we know from disclosure that they will be facing disciplinary board hearings on the grounds of :

No such disclosures exist in the cases of Thompson or Grenfell. In fact the RADB statements are specifically devoid of details, and unusually the GRV Stewards Inquiries disclosure contain absolutely no reference at all to an inquiry regarding either Grenfell or Thompson.

The only advice from RADB on the charges being that, in the case of Seona Thompson:

and in the case of Samantha Grenfell:

Notably Thompson and Grenfell would appear to be sharing the legal representation of Barrister Dayle Brown in their respective hearings.

Adding further mystery to the Seona Thompson proceedings is the sudden and quiet departure of Marg Long from her role as General Manager of The Meadows greyhound club (MGRA). Long, who is the partner of Thompson’s father Ron Hood, had been been in her role at the Meadows for 27 years and was at one time a member of RADB herself. Long was inducted in to the GRV Hall Of Fame in 2016 for contributions to the greyhound industry through administration, and is one of only nine administrators in the sport to be inducted.

It was the lack of fanfare surrounding the departure of a previously lauded Hall Of Fame GRV figure that has surprised many. In fact neither GRV CEO Alan Clayton in his regular messaging, nor the GRV Monthly industry publication, even mentioned Long’s career longevity or her contributions to the industry and Meadows greyhound club.

MGRA Chairman Eddie Caruana was effusive in his praise of Long paying tribute “to Marg’s dedication over four decades in the greyhound industry.”

“Marg is truly an icon of our sport and will be retiring at the end of June after having spent 40 years working at various greyhound clubs – the last 27 years with the MGRA. She has been an integral part of our organisation, leading the Club through many important transitional changes including the move from Olympic Park to Sandown and then onto The Meadows.”

“The development of our state-of-the-art racing and conferencing facility was overseen by Marg, as have been numerous other upgrades and projects over the years. Marg will be sorely missed by everyone associated with the Club and on behalf of my fellow Directors, I want to thank her for her invaluable contribution both to our Club and to the wider greyhound racing community.”

But on the subjects of Long, Thompson and Grenfell; GRV headquarters seem to have lost their voice.