John McKenna has tonight been announced as one of the inaugural 36 inductees in to the Victorian Greyhound Racing Hall Of Fame.

However, precious few these days know a lot about the man after which the race is named, the great John McKenna, who was a big advocate for distance racing in his heyday.

Born in 1901, McKenna was a country boy turned staunch Sandown GRC administrator who was not only a hero of the Sandown club, but in the community at large.

An outstanding country footballer who captained Tatura as a feared ruckman, McKenna’s leadership qualities were apparent throughout his entire lifetime.

His involvement in the administration of greyhound racing began when he was only 18 as Secretary of the Tatura Coursing Club, a position he held until he was 34 when he moved to Melbourne. It was at this point, in 1935, that he was appointed the Secretary of the Sandown GRC, and he stayed in that role until 1970.

The Sandown club experienced some interesting times during McKenna’s reign, particularly in the 1950s when the club was confronted with some major issues. One of those included the club’s move from its current location to a site on the other side of the nearby railway line. Also, Sandown was abolished as a proprietary club in 1955 only to get a new license under the sport’s controlling body, the National Coursing Association [NCA] in 1956. A few years later, in 1959, an infamous split occurred between Sandown and the NCA which created significant turbulence.

McKenna was a devoted family man who had four children, and his wife Anne also spent many years involved with Sandown and was an icon at the race club in her own right. 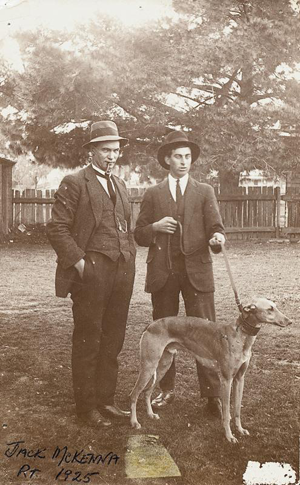 Not only was McKenna a great provider for his family during difficult economic times, but he also helped many others.

“He was a fantastic humanitarian and had a very strong association with St. Josephs Catholic Church in Springvale. He was like the godfather of the Springvale community”, said McKenna’s grandson Mark O’Brien.

“He’d fill his trolley with meat each week and hand out meat parcels to people in the community who were going through hard times. He would also regularly offer people who were out of a job a couple of days of work pushing a broom, painting a fence or working a turnstile at Sandown so they could afford to feed their families”, O’Brien added.

McKenna was also heavily involved in raising funds for the needy.

“He would continuously be hitting up the bookmakers at Sandown for donations and raffle tickets to assist the worthwhile causes he was involved with like the Royal Children’s Hospital. He helped raise money for building programmes for the Church and St. Josephs School and was one of a group of people in the town who regularly met to improve the township of Springvale in the days before council came in”, O’Brien said.

McKenna was a strong advocate for mechanical hare racing, which was banned in the 1950s
efore becoming legalised again, and he was instrumental in separating Sandown from the NCA.

His role at Sandown included being the club’s Grader, which involved determining which of the greyhounds that were nominated to race at Sandown by their trainers each week got to race, and who they lined up against.

The late Sylvester Doyle, himself a legendary greyhound administrator who worked alongside McKenna for three years before the club separated from the NCA, once said of McKenna… “He was without peer as a grader and he possessed an almost fanatical faith in Sandown”.

In his time as an administrator, McKenna was determined that Sandown would provide the best standard of racing in the state, if not the nation.