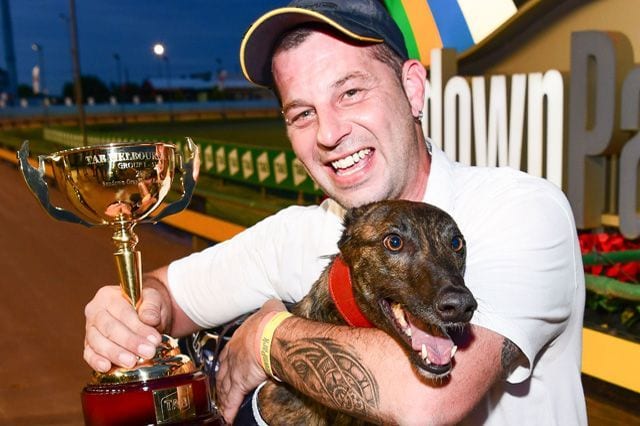 What an extraordinary race! The 2020 Melbourne Cup will go down in history, not just for the brilliant win by Hard Style Rico but also for the track record time of 28.91, created partly by the dog’s best-ever first sectional of 4.99. The trainer’s victory dance was an added bonus.

Mind you, the track was obviously in apple pie order, as franked by a very swift run of 29.10 by fifth grader Eagles Nest Egg (Brendan Pursell) later on in the program.

Favourite Simon Told Helen (2) was always battling. As I feared, rails runner Zipping Sullivan hassled it from the start and finished it off with a hip and shoulder on the first turn. In the circumstances, Simon did really well to finish second 5.5 lengths back in 29.29. Strong railer Lucys Milo (4) also helped by pushing over to the left and leaving the road wide open for Rico out of box 5 (I missed that point in my previous analysis – it was certainly predictable).

The outside three never really got into the race with Shima Shine particularly disappointing after a poor jump. It’s credited with a solid 5.12 but I suspect that reflects where it eventually got to rather than how it came out of the box. It was never a chance in this field after the first 10 metres. Such is racing.

Manila Knight’s victory in the Bold Trease was equally extraordinary. Except for the winner, almost the whole field ran slower than in the heat – which is pretty normal – but it followed this comment from the trainer after last week’s run:

“Manila Knight had pulled up flat from his heat run that required Manila Knight to be taken to Dr Des Fagan on Saturday morning following the race.” That’s code for “be wary about its chances”.

As it turned out, the dog recovered and ran one tenth quicker in the final. Rarely does that happen for a dog in its second distance race. More often the reverse happens. All credit to his fitness and a strong chasing urge.

At the same time it’s just as well we don’t have in-play betting. At the home turn, I would have put a motza on Sir Truculent to win by a couple of lengths. Alas, he had finished his big run and Manila Knight kept keeping on.

Interestingly, just a day before, David Brasch in the Recorder quoted similar comments from the trainer of Brisbane distance winner Micks Recall:

“Hosking admitted the rise in distance had an effect on the bitch after the race but by the following morning she had bounced back”.

It makes it hard to guess at how these stayers will bear up from one week to the next.

That certainly applies to Sunset Bourbski which was a close third early in the Bold Trease but then disappeared out the back and stayed there – just following the field around. Any interference was minor and could not explain such a poor performance. The dog had been performing well through August-September but has since run erratically. The run warranted a steward’s query at least, especially for a dog on the second line of betting. It did not even get a vet check despite finishing 9 lengths last.

Still, it’s odd that two dogs in comparable circumstances – Houdini Boy not well boxed in 6 and Manila Knight which loves the 8 box – started at markedly different prices – $2.90 and $6.70 respectively. Clearly, there was an emotional push for Houdini Boy. The figures never justified that.

Let’s also summarise the time differences between the heats and the final. Two runners, the winner Manila Knight and He Shall Power (4th) both improved on their heat times. The other six, including the favourite, averaged over four lengths slower. Overall, five runners would have won the final if they had repeated their heat times.

Otherwise, and considering the excellent race coverage on Channel 73 (thanks GRV), I have to throw in a big negative. I thought the major events could have been much better choreographed, both pre- and post-race. A motley collection of trainers, some with shirts tucked in, some not, some with caps, some not, all wandering around to no end purpose, did not offer a professional look. Ideally, each of the trainers would have been interviewed prior to the meeting without disturbing the whole process. Tapes could then have been run prior to the actual event. It also needed more captions for the interviews, while sub titles on the commentary were again missing.

What a difference it would have made if they had taken a few grand off the three quarters of a million dollars prize money (just for the main two races) to smarten things up all round. I am sure the hundreds of thousands of viewers watching would have loved that – many not familiar with greyhound racing – as would the industry at large.

Finally, can I agree with another commentator who called for the club to find another name for the Cup series. Whether it occurs in November or at another time it makes no sense to promote a thoroughbred title revered throughout Australia. Victoria Cup would do but each to his own.

Actually, Plan Ahead did most of this on his own when he danced the Sandown two-step (sideways) to get around the dog in front of him, hitting Westar Bundy on the way. The club maintains this has nothing to do with the first turn layout but it sure happens a lot.