A STRONG crowd made up of greyhound trainers, owners and lovers has begun its fight against an industry-wide ban in NSW at the Fair Go Rally in Hyde Park.

With more than 1500 in attendance, leading trainer Noelene Holloway kicked things off on stage, pleading for common sense to prevail and for her community to be saved.

“Make no mistake, you are not just banning greyhound racing,” Holloway said.

“You are banning a community of thousands who interact with each other, love each other and love our dogs.

“It (the NSW ban on greyhound racing) is an absolute disgrace.”

Leader of the NSW Labor party, Luke Foley, then addressed the crowd, promising to lead the fight against the ban.

“I am totally opposed to Mr. Baird’s shut down of your industry,” Foley said, to big applause.

“I and my Labor colleagues will fight inside and outside parliament against this shutdown.”

Foley highlighted the contribution the greyhound industry makes to the state and lambasted the Government’s hasty decision to bring it down.

“This is not the sort of thing we can accept in a free and democratic country,” he said. 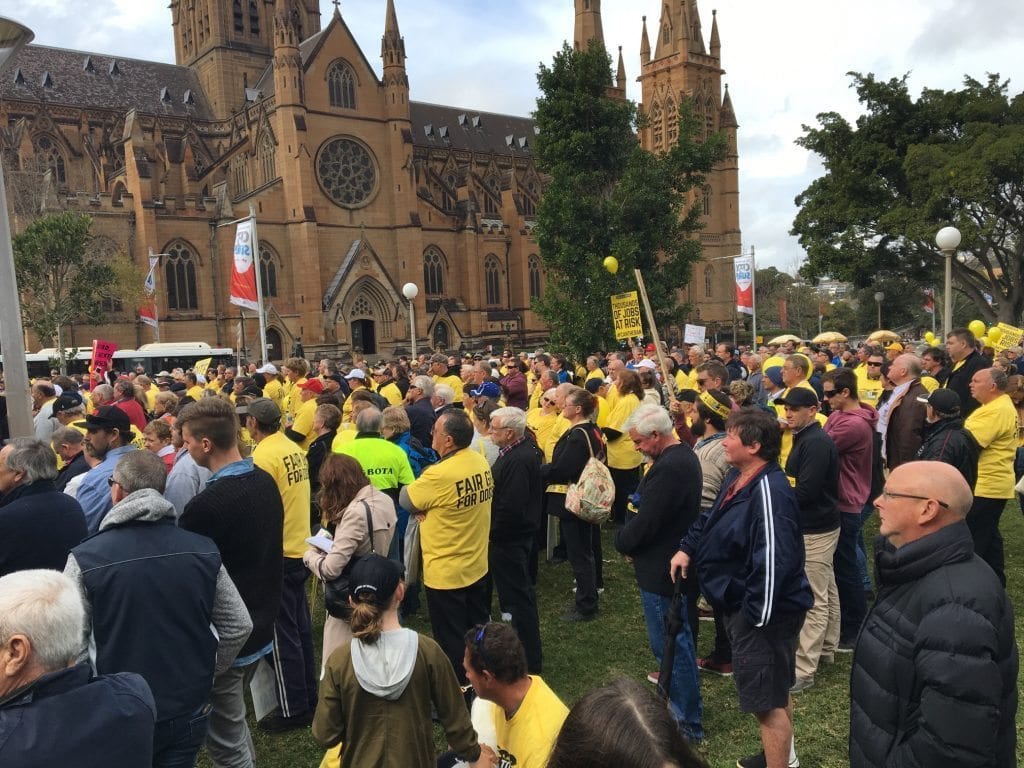 “The shut down of an industry that contributes $335 million to our state’s economy every year. An industry and sport that returns taxes to the state government of more than $30 million a year to schools and hospitals.

“Your sport makes a contribution to the social fabric of our society. It fills Government coffers.”

In many arguments against greyhound racing in the weeks since the ban, animal cruelty has been the main justification for the ban. Foley argued strongly against the point.

“Mr. Baird’s announcement on social media, without a jot of conversation with thousands of good men and women in the sport of greyhound racing, is a tyrannical measure, masquerading as a humane gesture,” he said.

“This is not a measure that will enhance animal welfare.

“Now we see that the Government has to engage and plan to partner with a crematorium – such will be the mass slaughter of greyhounds under Mr Baird’s plan.

“Mr Baird’s plan is a plan that will inevitably result in the slaughter of thousands of loved greyhounds. 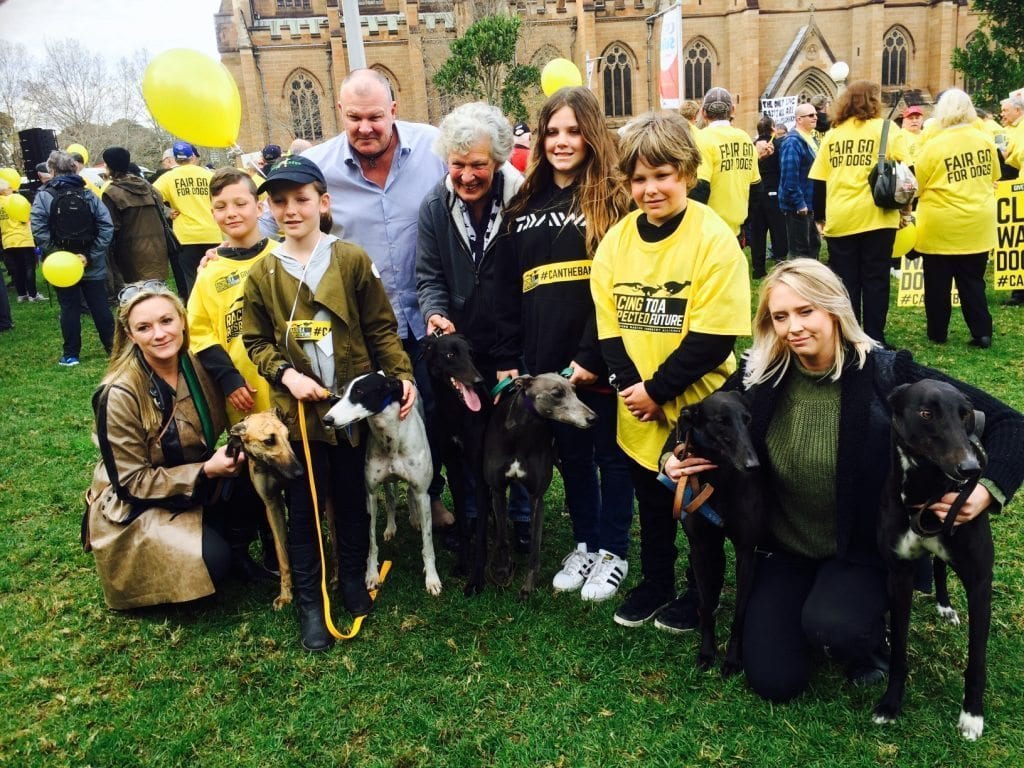 Foley went on to banish trainers and criminals engaging in animal cruelty that have given the sport a bad name and presented a plan for the industry’s future.

“If you’re engaged in animal cruelty, get out of the industry – there’s no place for you,” he said.

“Everything I have heard only strengthens my faith that there are so many good men and women in this industry that we shouldn’t give up on.

“The journey of reform has to continue and I’ll be putting a plan before state parole that would implement many recommendations, to ensure animal welfare.

If there have been acts of animal cruelty, Foley said it reflected on the laws, the resources and supervision of the industry, which is a slight on NSW Premier Mike Baird, who has faced extreme heat since the announcement to ban greyhound racing from July 1, 2017.

“It’s a failure of Government – a Government happy to take the taxes, but not provide the oversight that you’ve all been calling for,” Foley said.

Foley said that a Parliament debate and vote would take place “perhaps this week, probably next week” on the motion. But whatever happens in Parliament it is unlikely to be the final chapter in what is looming as a messy saga.

AustralianRacingGreyhound.com.au will keep you updated as more information comes to hand.

dogem53 John Tracey Deborah555 DaveSampson75 Hi Dogem53, your right about the swears but I am only tough on my friends, you are going great it will put an extra 10 years on your life. Deborah is a bit of a smiling assassin as well.

John Tracey Hugh_ dogem53 Deborah555 I guess the reason I say my views are not radical is that I don’t necessarily encounter overwhelming resistance or disagreement with them (as far as the core principles go), it’s more that people haven’t thought about things from that perspective, or at all, which as you say is often due to visibility.  If these things aren’t visible people don’t give them much contemplation.  I suppose it could be viewed as radical to be raising these issues at all, and certainly certain choices I make as a result of these views could be seen as radical because they… Read more »

dogem53 Deborah555 Hugh_ I don’t have kids.  I get where you’re coming from, and when you put it like that then no, I have no real objection.  The problem is there is more to it than that.  The comparison of parents putting their children isn’t a sports program isn’t quite apt, to make the analogy more appropriate the parents would have to be breeding many children to obtain the few that are good at sport and can earn them money, and euthanizing the ones that aren’t good performers.  I would certainly object to any humans doing that with their children, just as… Read more »

dogem53 DaveSampson75  I have already stated that the ABC that I once respected for it’s objective news reporting seems to have adopted a “60 minutes” style of reporting. Whilst I can understand given the 24 hour news cycle and the international competition why some of the commercial stations might need to pander to some of the less honourable human emotions for the sake of market share and their shareholder dividends but the ABC is funded by the tax payer so the motives can only be political. Whilst I thought the emotional and gut wrenching story about the abuse of Aboriginal boys in… Read more »

Hugh_ dogem53 Deborah555 Hugh a lot of what you are discussing is very helpful and contains things that I have put up to the special commission of inquiry to support sustainability, I will take your post to round table on this subject. I have run in to a lot of work with deadlines but I will get back to you. Just on the visibility aspects this is the best reference I use http://www.palgrave.com/cn/book/9780230243873 In case the prompt does not work. Animals, Equality and Democracy Authors: O’Sullivan, S. The effective legislation on the preventation unnecessary cruelty was first muted to put light on the… Read more »

John Tracey Hugh_ dogem53 Deborah555 Sounds interesting John, keen to hear of any outcomes.  Thanks for the link, looks like a good resource worth tracking down.

dogem53 Hugh_ John Tracey Deborah555 Dogem I have to say I don’t really understand your critique. Of course I want to see an end to animal suffering today, just as I want to see an end to the war in the middle east, homelessness, gender inequality, and every other injustice that I perceive to exist, today.  That doesn’t mean I’m naive enough to think these things will necessarily change any time soon or even in my lifetime, but the most sure way to guarantee that nothing will ever change is if everyone accepts the status quo.  So I make my arguments, I stand… Read more »