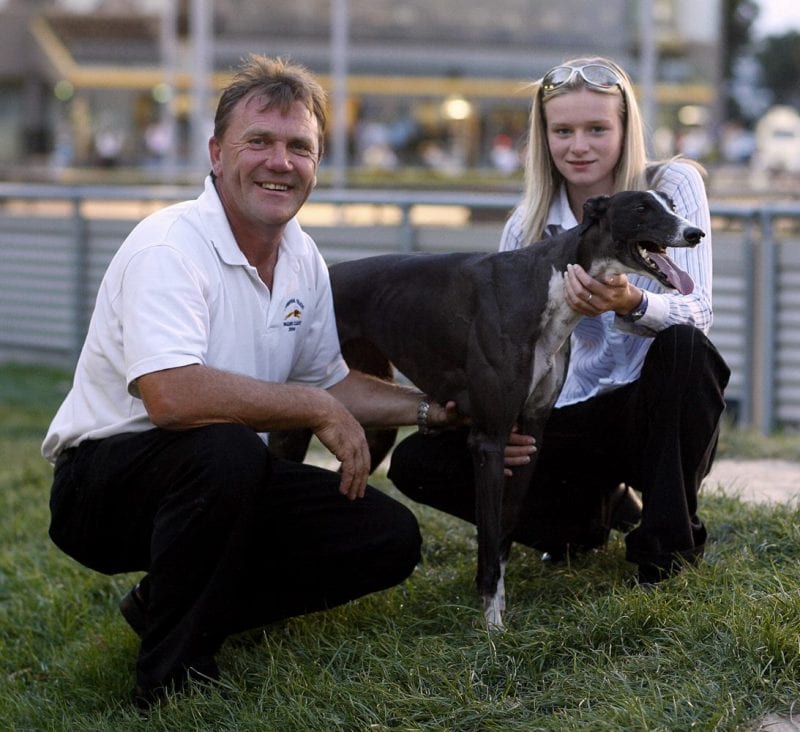 Steve White and Kayla Coleman with Paua To Burn.

THEY say the only thing wrong with dogs is that they can’t live forever.

It’s a sentiment shared by Steve White, who had to say goodbye to his ‘best friend’ Paua To Burn on Tuesday afternoon, with the champion race bitch passing away just two days short of her 14th birthday.

The black and white chaser was one of the greatest the sport has seen, winning four group 1 races throughout a glittering career which later saw her inducted into the Greyhound Racing Hall of Fame.

White spoke fondly of Paua To Burn, known around the kennels as Tina, and the decision to say goodbye on Tuesday after she started ‘to go downhill’ over the past few months.

“She knew. She walked into the kennels and said hello to all the dogs and walked straight back out.

“An hour or two later she just looked at me and I could see she was struggling so I knew that was it.

“Sometimes as people we get a bit selfish because we don’t want them to go, but it was her time and the last thing I would have wanted would be for her to suffer or be in pain.”

A daughter of Awesome Assassin and Alice Dooley, Paua To Burn started her career on February 15, 2004, placing second in a maiden at Ipswich. She would then go on to win nine of her next 11 starts, including her first feature win in the 2004 Group 1 Laurels.

Two starts later, the bonny bitch placed second in the Group 3 Young Star Classic at Wentworth Park behind Eifella, with her next win coming in a heat of the Group 1 Paws of Thunder before finishing fifth in the final a week later.

Next it was back to Sandown, with Paua To Burn brilliantly winning both her heat and final of the Group 1 Sapphire Crown. Her form saw her receive and invitation to the Shootout and Topgun, finishing second and eighth respectively behind Whisky Assassin in both finals.

Moving on to the Group 3 Temlee and Paua To Burn was back to her best, scoring in a scintillating 29.64 over the 525m trip at The Meadows. Four starts later the 26 kilogram pocket rocket added another trophy to the cabinet, winning the Group 1 Golden Easter Egg at Wentworth Park.

Proving she was far from finished, Paua To Burn returned to Sandown Park following the Topgun to take out her second consecutive Sapphire Crown title. She would only go on to race twice more at Sandown, winning a heat of the Melbourne Cup before crossing the line sixth in the subsequent final.

Returning to her home state, Paua To Burn was runner-up in the 2005 Group 3 Christmas Gift final, before one last interstate campaign saw her claim top honours in the Group 3 New Years Trophy and the Group 3 Rookie Rebel, with her last Victorian start being a seventh in the Group 1 Australian Cup at The Meadows.

As a rising four year old, Paua To Burn contested her last series at Wentworth Park, aiming for a second Group 1 Golden Easter Egg. Exploding from box four in her heat, Paua To Burn set a new track record of 29.51 over the 520m trip, however she could not complete the fairytale, finishing seventh in her semi-final behind eventual winner, Edie Beauchamp.

Paua To Burn’s final race start was in the 2006 Group 3 Golden Easter Egg Consolation, finishing fifth, with the champion chaser finishing her career with 28 and 14 minor placings from 59 starts, with a total of $434,705 in prize money earnings.

White said despite his sadness, he is determined to remember the wonderful memories Tina had given him.

“She did something that a lot of people can only dream of.

“She broke five track records, won four group 1s, three of them by about nine or 10 lengths…she made good group dogs look like they were grade five dogs.

“The only race which she only just won was the Golden Easter Egg and I think that was her best performance by far because Eifella went past her and she had to show all her guts and determination to come back and win it.

“She was just a machine.”

Even from day one, White says there was something special about Tina who he bred, reared, owned and trained.

“When she was about eight of nine months old we put her in the runs next to some dogs which were 17 months old and she was going past them like they were standing still.

“I took her to the Dapto Auction, even though she was never going to be for sale, and a bloke came up wanting to buy one of my dogs before it started.

“I agreed and I opened up the trailer door which happened to be the one which Tina was in…she jumped out and he proceeded to tell me that he didn’t want her because she was too small.

“After she won her first group 1 he rang me up and asked if she was the one he said was too small and I just said ‘yep buddy that’s the one’.

“She wasn’t the biggest dog, but she had a massive heart.”

Upon heading to the breeding barn, Paua To Burn achieved what few top bitches have in that she was a fantastic producer.

Her daughters have continued on her legacy, with Paua of Love (x Bombastic Shiraz) producing three-time group-winner Black Bear Lee, Paua To Erupt (x Spiral Nikita) producing track record holder and group winner Paua To Roar and Paua To Terrify (x Spiral Nikita) currently making a name for herself as a broodbitch with her hot litter to Barcia Bale including Group 2 Vince Curry winner Paua To Avoid.

White thanked the wider greyhound fraternity for their thoughts during this tough time and says he has plans to pay tribute to Tina at his new property in Buln Buln East.

“I have been overwhelmed by all the people contacting me – I have had close to 100 text messages and Facebook messages from people I don’t even know sending their condolences.

“I’d like to thank everyone who has reached out – it is nice knowing that she made a lot of people happy all around Australia.”

“I got her cremated so I’ll bring her ashes home and she will be with her mum Alice Dooley and another good dog I had, Stole The Show, and when it’s time for me to go all three of them will come with me.

“She used to like laying in the sun next to a lemon tree so we are going to build a memorial garden out the back with a nice plaque.

“We will never forget her… she was one in a million.”

What an outstanding race bitch she was and she also left some good breeding stock as well. Great Tribute Kat.