Wee Sal has tonight been announced as one of the inaugural 36 inductees in to the Victorian Greyhound Racing Hall Of Fame.

While Brown’s beloved Magpies overcame drought that day to claim its first AFL premiership in 32 years, the greyhound trainer himself achieved a sporting milestone on the day.

His promising greyhound Wee Sal had just captured the Albury Cup, which was her one and only group race win. Ironically, Wee Sal was dressed for the occasion having worn the number 2 rug [black & white stripes] in the race, while Brown’s wife Myra was also dressed in her finest Collingwood Football Club attire including hat, scarf and jacket.

“No interviews today”, Brown told local journalists after the win, in which Wee Sal had paid $16 in what was just her seventh race start.

After quickly posing for a post-race photograph, Brown snubbed the media as he rushed home just in time to watch the second half of Collingwood’s famous victory on TV.

“Myra and I actually had tickets to the Grand Final but gave them away to friends because Sally [Wee Sal] was racing in the Cup”, Brown recalled. 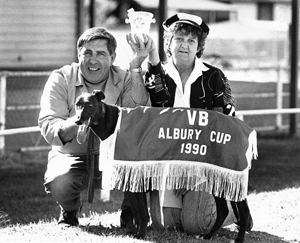 While the Albury Cup was the highlight of Wee Sal’s career, her worth as a producer has been phenomenal. Her progeny and grand progeny have collectively produced more than 100 Group 1 winners.

Wee Sal had a total of seven litters with her best pups including Royal Honcho, Dancing Angels, Master Havoc and Sobbing Sal, with the latter producing two of the best stud dogs of the modern era in Brett Lee and Big Daddy Cool.

“Wee Sal’s second litter [to Head Honcho] produced Cry Havoc, who trialled a length off the track record at Geelong prior to his first race start. We sold him for an offer that was too good to refuse.

Unfortunately he broke his leg and never raced but he spent time at stud”, Brown said.

“Cry Havoc’s litter brother Royal Honcho was something out of the bag. He had 21 or 22 wins at Cranbourne and was favourite every time. Sadly he developed cancer fairly young which prevented him from being a stud dog as well”, he added.

Brown had no hesitation in declaring Wee Sal’s grandson Brett Lee as the best greyhound that she or one of her daughters has produced.

“Brett Lee is out of Sally’s daughter Sobbing Sal and it feels like we bred him ourselves. He was hailed as the fastest dog in the world and with the track records he was running it was hard to dispute it”, Brown said proudly.

Incidentally, Wee Sal was the first female greyhound that Brown had trained because he didn’t want the hassle of dealing with seasonal problems as he was busy holding down shift work as a train driver at the time. However, his wife was intent on owning a black female pup, and so Brown began his search.

“I looked though the list of whelpings and a particular litter caught my eye that was sired by Chariot Supreme, who was the hot sire at that time. The litter was bred by Doug and Lorraine Ferremi, who we had never met before. We went to their property to see the pups, but they weren’t home”, Brown recalled.

“A few weeks later I came home from work one morning at 3am and I nearly tripped over Sally, who was in the laundry. Unknown to me, Myra had gone back and bought her from Doug and Lorraine for $850.”

Raising Wee Sal posed some difficulties for the Browns, mainly because of their neighbours.

“The children next door bred rabbits and every day the kids would let the rabbits loose in their back yard. When this happened Sally would scratch away at the fence palings trying to get to them. She’d scratch so hard that she tore the pads off her front paws twice. This kept her sidelined for several months in the lead-up to her first race start and she didn’t race until she was two and a half years old”, he said.

Brown remembers feeling the pressure of expectation in the months leading up to Wee Sal’s first race as her litter sister Highly Blessed, who was trained by Doug Ferremi, was fast establishing herself as one of the best sprinters in Australia.

“We had bought Wee Sal for breeding purposes first and foremost so I had always planned to take things slowly with her as far as her racing went, but the pressure was building because Highly Blessed was going so well and people didn’t realise what Wee Sal had done to her paws. I was bathing them in salt water and treating them with an ointment every day and eventually she recovered”, Brown said.

While Wee Sal carved out the handy statistics of 10 wins and 10 minor placings from 49 career starts, she couldn’t manage a win in the city and lived in the shadow of her decorated litter sister Highly Blessed, who won eight group races including four at Group 1 level.

However, brood matrons of Wee Sal’s calibre don’t come along every day…perhaps only as often as Collingwood premierships.