CHAMPION sprinter Fernando Bale has already commenced the next phase of his career after joining Paul Westerveld’s Meticulous Lodge over the weekend.

The white and dark brindle speedster was retired after injuring his back following a dominant win at Sandown Park on Thursday night and has since settled in to his new home.

“He is perfect. He has the best temperament and he has settled in well next to Barcia Bale and Fabregas – the three of them get along like a house on fire and it is like they have been there forever,” Westerveld told Australian Racing Greyhound.

“It was very exciting for us to be asked to stand him and we are very lucky that Paul and Jan Wheeler have entrusted us to take on and stand some of their best dogs at stud – we are honoured.”

Trained by Andrea Dailly, Fernando Bale (pictured with Fabregas) started 44 times for the incredible record of 35 wins and five minor placings and a world record $1,299,370 in prize money earnings.

Renowned for his scintillating early speed, the son of American sire Kelsos Fusileer and Chloe Allen won eight Group 1s throughout 2015 as well as two Group 2s, one Group 3 and two track records. He is also one of only two greyhounds to have broken the elusive 29 second barrier at Sandown Park, having recorded a phenomenal 28.98 over the 515 metre trip.

Based on his career, Westerveld was not frightened to declare him as the best chaser he has witnessed. 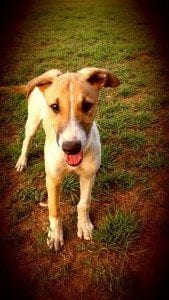 “I have been in the industry for 26 years and he is the best dog I have seen,” he said.

“To achieve the feat of winning eight Group 1s in less than 12 months is remarkable and I don’t know if we will ever see that again.”

Since siring his first litter in August this year while he was still racing, Fernando Bale has been in demand from breeders, with Westerveld hoping this trend continues now he is at stud full time.

“He has been a shining light for the industry during our darkest times and he is in high demand from breeders – the phone hasn’t stopped ringing,” he said.

“Racing was his priority, so we got collections out of him when we could but there were times where we couldn’t get anything from him for six weeks which was a shame because we missed out on some really good bitches.

“The ones he has got so far have been of fantastic quality – some of the best breeders in Australia are using him on their top bitches and the reports with his oldest litters have all been terrific.

“Nothing phases him and I think that is precisely what you want when using a stud dog and hope that they throw that trait into their pups.”

PICTURED RIGHT: One of the pups from the Fernando Bale x Zipping Tess mating

While being a champion race dog never guarantees success in the breeding barn, Westerveld believes his breeding is ideal for many Aussie-bred bitches.

“You need a bit of an outcross with most of the Australian bitches now because our gene pool is so closed in to the same colonial bred sires – so he certainly offers that diversity that breeders are looking forward to.”

Retired just in time, commercial sire and $4400 is a little high but not too much, you will have a chance to sell because of the hype, but even if he is a big success remember more of his pups will end up in the GAP programme than any other sire, because not all pups will not succeed, unless, of course he is another Temlee.
Good luck to the connections and I am sure he is in good hands at Meticulous Lodge

Retired just in time, commercial sire and is a little high but not too much, you will have a chance to sell because of the hype, but even if he is a big success remember more of his pups will end up in the GAP programme than any other sire, because not all pups will not succeed, unless, of course he is another Temlee.