FOLLOWING discussions with Caralyn Fielden at Greyhound Racing South Australia, we are pleased to say we will now be featuring regular monthly whelping reports from South Australia.

This week’s first monthly report from South Australia covers all litters notified to GRSA which were whelped in February this year, with a total of seven litters with 29 pups at an average of 4.1 per litter.

Our first litter for review from the February Whelping Report from SA is four pups, registered by Hallet Cove breeder, Brendan Gottschutzke. Through the wonders of modern science, the pups are by a dog who would now be 26 years old — US sire EJ’s Douglas* (pictured) (December 1990 Hey Vern x Abigail Girl) — who had some strong influence on the breeding scene here over the past 20 years, from limited opportunities.

She is from a litter of three named which included I’m A Player and Surfing Sandy, with their dam having eight other named offspring on file, from litters whelped in November 2006 by Kiowa Sweet Trey* and July 2007 by Bombastic Shiraz. 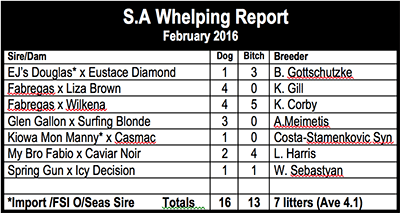 She has two previous litters on file, with some good winners from the first litter, whelped in May 2013 by Lochinvar Marlow, which produced, Dantes Spirit, Golly Pardon, Lizard Spock, Rochelle, Southern Tiger, Thrice Penny, Vegas Fund and Wheel Spinner.

Her second litter, whelped in November 2014, by Oaks Road has four dogs and two bitches, with one named to date, Pavlova, who was due to have her second start at Angle Park on Wednesday this week.

Amongst the winners from her July 1999 litter by Gun Law Osti I noticed Riverlee Bale, who produced winners at stud from limited opportunities, and there are a lot of daughters, granddaughters and great granddaughters of EJ’s Douglas out there with winners to their name and I could have spent a whole day and filled this week’s whole column with their stories.

Certainly is an interesting litter Brendan, and I for one will certainly be following the progress of these well bred youngsters, especially the three bitches, in coming years.

NEXT on the SA list this week we have two litters by National Sprint Champion, now successful sire Fabregas (October 2010 Bombastic Shiraz x Wicked Witch) who is still five months off his sixth birthday.

Liza Brown is from a litter which included, Drageda, Isa Perkin, Isa Shady, Prudence Brown and Shonky Shaw, with their dam also producing winners from her five other litters, by Collide, EJ’s Douglas*, Spiral Nikita*, Surf Lorian and Waterview Star.

She has winners on file from each of her three previous litters, all bred at Two Wells by Karen Bearpark and whelped in September 2010 by Falcon, September 2012 by Vee Man Vane (which included Oz Striker, She’s So Vain, and Viscount Vane) then January 2014 by Lochinvar Marlow, with four named, all winners, Brando Brown, Lachlan Brown, Marlow Brown and Vincent Brown.

Wikena is from a litter which included Ollaxon, Quicksilver Blues, Tunkalilla, Walpinga Lass, Yiki and Yoshi Blue, with their dam also producing winners from both of her other litters, whelped in January 2004 by Primo Uno and December 2005 by Big Daddy Cool.

She has one previous litter on file, unfortunately only the one dog and one bitch, whelped in April 2014, by Cosmic Chief, with the dog pup, Harbormaster having raced eight times to date for five wins, all over 515m at Angle Park, 29.63, 29.76, 29.61, 29.87 and 29.68 which is certainly an impressive start for him that should create plenty of interest in this litter. 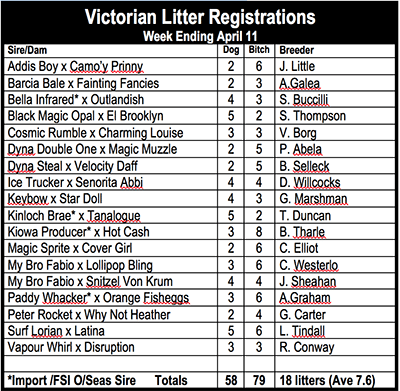 Camo’s Prinny is from a litter of two named, which included Camo’s Lucky, with their dam only having one other litter on file, whelped in November 2008 by Black Enforcer, with three named, Camo’s Bluedoll, Camo’s Dollforce and Camo’s Forcer.

Addis Boy is from a litter which included Dallaretto Dame, Golden Ambrose, Night Prince and Yozi Token, with their dam having six other named offspring on file, two each from three litters, by Black Shiraz, Placard and Proper Tears, whelped from 2002 – 2004.

Certainly plenty to like about the breeding of this litter John, I do like the pedigree of the dam Camo’s Prinny, I think Addis Boy has done pretty well as a sire considering the limited opportunities he has had.

She is from a litter of six named, which included Abbi’s Princess, Best Song Ever, Comprado, Senor Pear and Senorita Pear, with their dam’s only other litter on file, three named, Abbi’s Boy, Abstar and Moorabbi, whelped in April 2011 by Where’s Pedro.

Their dam also has winners on file from each of her three other litters, whelped in June 2011 by Dyna Lachlan, August 2012 by Where’s Pedro and September 2013 but her first litter, by Bombastic has been by far the most successful to date, although I will be more interested in seeing what her daughters produce in the coming year.

CARRUM DOWNS breeder, Barry Tharle, has a nice litter of 11 pups on the list this week, by the US bred imported sire, Kiowa Producer (April 2011 Dragon Fire x Kay V Sweet Kay) that should create enormous interest amongst prospective buyers with future breeding in mind.

She is from her dam’s only litter of six named, which included Energy Force, Enervate, Hot Hot Hot, Leave Pass and Sorcha and I would suggest there are many prospective breeders out there who will be keenly following the daughters of Fabregas as they become available for breeding, considering as we noted earlier, Fabregas does not turn six years old for another five months.

On the track he raced 94 times for an amazing 50 wins and 18 placings, was selected as a 2013 All American, and won the Mardi Gras Hollywood World Classic, Southland Derby and the Chris Callas Memorial, winning most of his races over the tricky 533m, so you would think his offspring would be able to run all day.

Plenty to like about the breeding of these well bred youngsters Barry, and I for one can’t wait for the first of this exciting imported sire’s offspring to reach the tracks.

The two dogs and six bitches in this litter are from the beautifully bred bitch, Cover Girl (June 2009 Premier Fantasy* x Witch Magic) whose dam is by Awesome Assassin x Star Witch (Bearability x Witchita), and who was bred by one of Australia’s most astute breeders, Paul Westerveld.

Cover Girl is from a winning litter which included Molly Molloy, Our Coralie, Premier Magic, Rush Hour and Witch Fantasy, with their dam also producing winners from each of her four other litters, whelped in April 2006 by Larkhill Jo*, October 2007 by Pure Octane, August 2008 by Hallucinate and January 2011 by Velocette.

Their dam, Prancing Uno, also has winners on file from her only two other litters, whelped in December 2009 by Bo Frazier, and April 2011 by Birthday Boy.

On the track, Orange Fisheggs was lightly raced with just 15 starts from which she scored one win, over 480m at Horsham (27.88) and three placings, over 450m at Ballarat and 390m at Warrnambool where she was also placed over 450m.

I am working on a more detailed story on Paddy Whacker* which will be ready in a couple of weeks, as there is so much to like about his pedigree, and he is a low profile imported sire, already a proven sire in three countries with a lot of potential.

She is from a litter of four named which included Bossman Jack, Dutch Daniel and Nova Vite, and it is worth noting that their dam, Nova Keroma has a 100% winning litter of nine named, by Surf Lorian, whelped in March 2007 which included four group performers, La Voca, Nova Surf, Seaswift and Showtime Leo, along with the only pup named, Leo The Line from an August 2009 litter by Surf Lorian, and also had winners from an April 2010 litter by Collision.

Latina has one named offspring to date, Chief Hiawatha who was whelped in August 2014 in a litter of five dogs and eight bitches by Cosmic Chief.

WE have no litter reviews from New South Wales this week, as despite several requests, GRNSW are yet to release details of the litters whelped in January, which would normally have been available the second week in March. 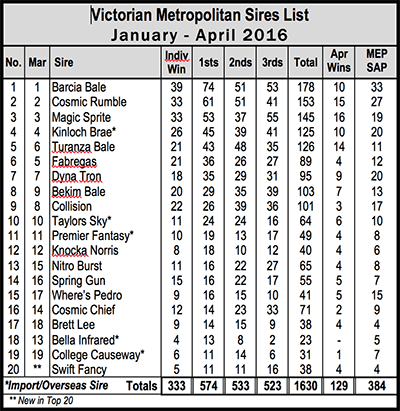 BARCIA BALE has retained his position at the top of the Victorian Metropolitan Sires list at the end of April racing after his offspring won 10 races on Melbourne’s two city tracks for the month, although his main opponents did move five wins closer.

Looking at the top five after deducting Wednesday and Sunday provincial stake meetings, Barcia Bale leads with 41 wins, followed by Cosmic Rumble and Magic Sprite with 34 wins each, Turanza Bale with 32 wins and Kinloch Brae* with 25 wins.

Magic Sprite, who is absolutely dominating the NSW Metropolitan Sires list was the top April sire in Melbourne with 16 wins, followed by Cosmic Rumble with 15 wins and Turanza Bale with 14 wins.

Just outside the top 20 at the end of April, both with 10 wins each are, Stagger and Razldazl Jayfkay*, then Lochinvar Marlow with nine wins, Nolen with eight wins, Oaks Road, Kilty Lad, Razldazl George*, Heston Bale and Buck Fever with seven wins each, Djays Octane* and Kelsos Fusileer* with six wins each and Dyna Lachlan, Bobby Boucheau, High Earner, Westmead Osprey*, Vee Man Vane and Farley Turbo* with five wins each.

Winners for the top April sires were as follows:

Emerley Senorita was the only pup named in her litter, and her dam has only three other named offspring on file, Emerley Assassin (December 2013 x Royal Assassin) then Emerley Azure and Emerley Ice (both whelped February 2013 by Velocette).

Judy said that the matriarch of her breeding line, Eudunda Eudunda has been very good to her, producing winners from three litters, by Big Daddy Cool, History Lesson and Royal Assassin, now she has high hopes for this litter from one of her granddaughters, and although one of the pups was on the small side and struggling at the time of writing she was keeping her fingers crossed.

REPELO MUGGLETUM (Black bitch, July 2014 Barcia Bale x Finlandia) won twice from four starts with two placings over 460m at Geelong before stepping up to 515m at Sandown on May 8, from box seven when fourth, beaten by 6.4 lengths in the race won by Silky Sock (29.71). That was only her sixth start and she will be improved by the run so watch her next time she steps out.

ELITE SHIRAZ (Fawn bitch, March 2014 Elite State x Flaming Shiraz). Lightly raced with just 15 starts for two wins and seven placings, before third from box three over 515m at Sandown on May 8, beaten 1.66 lengths in the race won by Destini Soprano (29.77). Plenty to like about that run and is a likely improver.

TWO of our previous bred to win greyhounds popped up in the second race at Sandown last Sunday when Belle Deity (Collision x Miss Bel Air) won, $2.10 and $1.10 and Eddie Eagle (Barcia Bale x Lara’s Rock) finished third $2.60) which gave us our third winner from six nominated to date.