She is from a handy litter, which included Beatrice Mel, Don’t Tell Mel, Rhythm King, Rio Rita, Wes Mel and Where’s Gazman, with their dam, Modern Mel, also producing winners from her three other litters, by Bit Chili, Phoenix Ice and Prince Diablo.

Bred by Russell Mc Crae, Al Moran is from a litter which included Allez Bijou, Annapolis, Especially and Sign’s Of Lee, with their dam, Special Sign, also producing winners from her two other litters, whelped in December 2009 by Where’s Pedro and April 2012 by Collision.

Southwood Alice is from a litter which included Beljay Fantasy, Fluke Of Fantasy, Occupation Lad, Southwood Dennis, Southwood Magic and Southwood Pluto, with their dam, Lady Juma, producing winners from both of her other litters, whelped in June 2010 by Paddy’s Flame and May 2011 by Melbourne Cup winner, Lord Ducal.
On the track she raced 50 times for seven with and 13 placings, winning three times over 400 metres at Geelong (22.79), three times over 425 metres at Bendigo (24.36) and also over 390 metres at Ballarat (22.92).

The litter of seven dogs and one pup are from the well bred bitch, Deja Voodoo (March 2010 Collision x Magic Maisy), whose dam is by Just The Best x Fi’s Comet (New Tears x Fiery Comet).

She is from a very good litter of nine named, which included Black Maze, Control, Dollstan Deal, Dollstan Grace, Dollstan Lad, Dollstan Magic, Free To Enter and Mr. Bohannan, witb their dam Magic Maisy, also having winners on file from her other three litters, two by Bond and the other by Primo Uno, with quite a number of them racing at Group level.

According to my breeding records she has one previous litter on file, two dogs and two bitches, whelped in March 2015, by Bekim Bale so she certainly has some well bred youngsters on the ground. 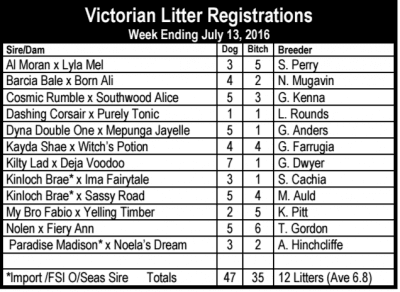 She is from a very good litter, which included Girthy, Ima Screw Loose, Kick Like Mick, Naughty Lee, Super Bronie and Walk Away, with their dam, Bronie Blue Bell, also producing winners from her four other litters, by Dyna Lachlan, Lochinvar Marlow, Meticulous and Trewly Special.

She is from an exceptional litter which included Black Traminer, Catalyst, Hooksy, Untraceable and Winfield Sammy, who were all winners, with their dam also producing some very good winners from her four other litters, whelped in July 2009 by Premier Fantasy (included Bella Profit, Midnight Fantasy, Ursula and Witch Hunt), July 2010 by Knocka Norris, February 2011 by Dyna Lachlan (included Danato, Jannik, and Real Vain) and March 2013 by Cosmic Chief (included Maddy Moustache, Uno Seoul and Uno Suzie).

According to my breeding records she has one previous litter on file, six dogs and two bitches, whelped in December 2014 by National Sprint Championship winner, Fabregas.

OUR final litter for review from this week’s Victorian list is a nice litter of eleven pups by the well bred, under-rated sire Nolen (November 2009 Collision x Brooklyn Belle).

She is from a litter of only two named, which included Ninja Backman, with their dam, Lee Joy having another six named offspring on file, from two previous litters, by Dyna Lachlan and Elite State.

TURNING our attention to the NSW Whelping Report for the two weeks ending March 31, our first litter selected for review, is one of eight pups by the beautifully bred, promising stud prospect, Banjo Boy (April 2011 Vee Man Vane x Off Springer). 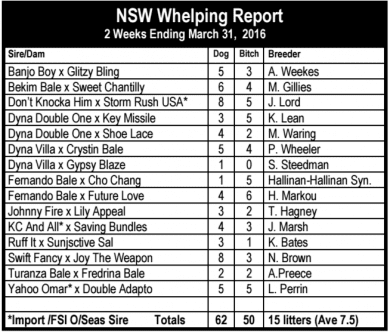 She is from a litter of two, her dam’s third Pure Octane litter, which included Omega Tara, with their dam’s other litters, two by Pure Octane, one by Premier Fantasy* and the other by Surf Lorian, all producing winners.

According to my breeding records, she has one previous litter on file, five dogs and three bitches, whelped in November 2014 by Cosmic Rumble, registered by Wilton breeder, Paul Bunyon.

13 pups in Don’t Knocka Him litter

Storm Rush USA* has one previous litter on file, seven dogs and three bitches, whelped in May 2015 by Banjo Boy, and with thirteen pups in this latest litter, I would suggest there will be plenty of interest from prospective buyers.

Another above average litter

She is already a successful producer, with her first litter, whelped in March 2014 by Swift Fancy, including, Baldcrew, Battle Station, Daisy The Weapon, Hoosh Nar, Katie The Weapon, Naughty Nathan, Struggle Street and Tommy The Weapon. 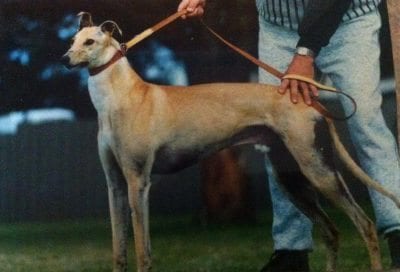 OUR final litter for review this week from the NSW list is a one of 10 pups by the highly rated, international sire, Yahoo Omar* (March 2007 Lonesome Cry x Pin Oak Vicki).

Double Adapto is from a litter which included Encosta Deplente, Pyjamarama and Thunder Rama, and their dam has also produced winners from her three other litters, by Collision, Dyna Lachlan, and Yahoo Omar* and worth noting her litter by Yahoo Omar* included Aerial Blitz, prolific winner Adderley Reform, Discombulated, It’s The Vibe, Magic Rama, Prince Omar, Russian Reign and Sandon Stunna.

Included with this review, is a rare photo of the great imported stud success, Grove Whisper* (February 1985 Whisper Wishes x Grove Road) who has had an enormous influence on the Australian breeding industry over the 20 years, and regular readers will know how many times his name comes up in litter reviews in this column every week or so.

THE Victorian Metropolitan Sires list for the seven months to the end of July, sees Barcia Bale on top with 117 wins, followed by Cosmic Rumble 101 wins, Magic Sprite 95 wins, Kinloch Brae* 74 wins, then Dyna Tron, Turanza Bale and Collision all with 64 wins each.

Cosmic Rumble was the top sire for July with 16 wins, ahead of Barcia Bale with 14 wins, then Magic Sprite and Collision, both with 13 wins each, and with Barcia Bale leading by 16 wins with five months remaining, we could be in for a very close finish come year’s end.

Just outside the top 20 at the end of July, with 14 wins each are College Causeway* , David Bale and Nolen with 14 wins, followed by Stagger and Djays Octane* 13 wins each, Oaks Road, Razldazl George* and Buck Fever 12 wins each, Kilty Lad, Bobby Boucheau, Dyna Steal, KC And All* and Milldean Panther*, 11 wins, then Lochinvar Marlow and Razldazl Jayfkay* 10 wins each.

Top sires for the month of July were as follows: 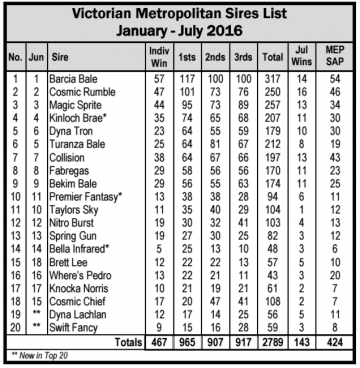 COURSING at Lang Lang last Sunday saw a ten event program, highlighted by the running of the GOTBA Cup, taken out in fine style by the Andrew Paraskevas trained, Better Than This (October 2013 Knocka Norris x Father Of Mine) who was too good for Collect (March 2013 Fabregas x Nalima), trained by Trevor Anlezark.
The main support event was the All Aged Stake, and here we saw a change of luck for Trevor Anlezark with Sultan (March 2013 Fabregas x Nalima) proving too good for the Geoffrey Scott Smith trained, Dundee Raptor (December 2013 Fabregas x Dundee Rose).

The final event of the 2016 Coursing season will be the two day Waterloo Cup meeting at Lang Lang on August 20-21, where the main event will be the $12,970 to the winner Waterloo Cup, for 64 all aged greyhounds, with preference given to greyhounds with previous coursing form.

Support events will feature the Waterloo Plate and Waterloo Purse for greyhound run out in the early rounds of the cup, with the usual Puppy and Maiden events on the Sunday. Enquiries to NCA Secretary – Sue Delaney (03) 9740 0444 or President – Peter Craig 0418 399 911.

LEVENSEAT BEVAN (Black dog, February 2014 Vee Man x Potomac). Trained at Pearcedale by Geoffrey Howell, he impressed winning three courses, including the final at last Sunday’s coursing meeting at Lang Lang and he could be headed for the Waterloo Cup next. Has shown plenty of ability of the track with 23 starts for three wins and 10 placings, winning over 400 metres at Warragul (22.99) and twice over 350 metres at Healesville (19.35 and 19.53). Watch out for him when he steps out on the track next.

JOFFA’S OLD GIRL (Black bitch October 2014 Bella Infrared* x Mepunga Lana). Six starts for a win over 450 metres at Warrnambool and three placings before last start fifth from box 4 at The Meadows (MEP) August 3, beaten 9 lengths in the race won by Tommy’s Tune (30.81) who won by five lengths. Nice type who will improve with experience, trained at Lara by Simone Fisher.

SUNSET OASIS (Fawn bitch, August 2014 Elite State x Soul Oasis). Trained by Peter Dapiran at Northwood and had 8 starts for 2 wins and 2 placings, before last start third, from box 1 at The Meadows (MEP) August 3 in the race won by Gassed Up Devil (30.95), beaten 2.5 lengths. Improving type, worth following.

Greyhound racing in Victoria lost one of its’ finest gentlemen last week with the passing on popular Cranbourne identity Lionel Kraemer. Lionel’s smiling face was a regular fixture at most meetings in the area, including coursing, where he was a long time committee member at Lang Lang.

His smiling face and willingness to help, advise, or just have a chat will be missed by all. Sincere synpathy to his partner Cath, and all family.

KRAEMER. Funeral Prayers for the Repose of the Soul of Mr Lionel Kraemer will be offered at St Agatha’s Catholic Church, 129 Sladen Street, Cranbourne on TUESDAY (Aug. 16, 2016) commencing at 11.00 am. At the end of the service a burial will take place at the Cranbourne Cemetery.

NEXT week we will have an update on the Victorian Stud Service figures, special coverage of the two day Waterloo Cup coursing meeting at Lang Lang, and our usual review of litters from both Victoria and New South Wales, along with any news that comes in through the Mailbag.