FABREGAL created history on Thursday night when she became the first South Australian-trained greyhound to take out the Group 2 Bogie Leigh Futurity (520m) at Albion Park.

Starting from box one in the $47,250 to the winner feature, the black bitch was fairly away and had to muster quickly in the run to the line on the first occasion, pushing through along the fence to take a narrow lead.

Despite finding the front, she still had to work hard, defying pressure from Tony Brett’s Split Image to kick clear in the home straight, scoring by one length in 30.02.

Trained by Robyn Mackellar, Fabregal had been heavily supported to take out the race, starting as the $2.50 favourite, however, despite being the punters’ pick, Mackellar said she remained cautious heading into the final.

“Although she went very well in her heat, the final was an entirely different field,” Mackellar told Australian Racing Greyhound.

“All the good dogs made it through to the final so I knew she was going to have to be at her best to win.

“She actually missed the kick in last night’s race, but I knew she wouldn’t leave the rails and luckily she was able to punch up through the first turn.

“Even then she still had Split Image right on her back, but she just kept digging and finding that little bit extra.

“She is a gutsy little dog and she never gave in. 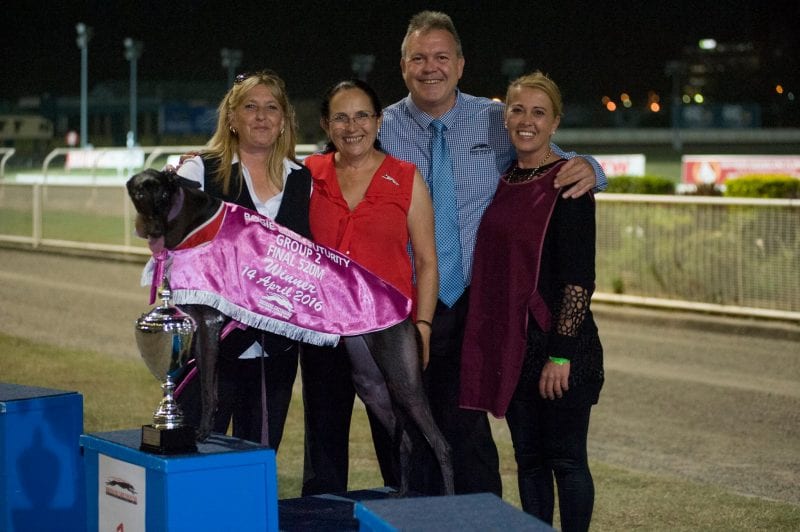 Fabregal took her career record to 22 starts for 15 wins and seven minor placings, with $64,770 now beside her name in prize money earnings.

Mackellar said she is glad she made the big decision to target the race, remaining in Queensland with close friend Desley Williams throughout the duration of the series.

“She had won all her young grades down in Adelaide, so I just thought why not give it a crack?

“It is an age restricted race and the way I thought about it was I would never know if we never had a go.

“We didn’t know how she would handle the travelling so it has been a good test for her to see if she would settle – which she did.

“I stayed with Desley Williams and she has been a wonderful host – everything has been spot on.

“Desley had Dashing Corsair so she knew how to handle the pressure of being in a group race, so she kept everything quiet, calm and settled.

“It has been a big few weeks for everyone but it was worth it in the end.”

Mackellar said the moment she realised she had won the race – the biggest of her training career – is something she will cherish forever.

“I couldn’t see from behind the boxes, but I heard Desley screaming so that’s how I knew she had won,” she said.

“I turned around and grabbed the closest person who happened to be Luke Gatehouse (Brisbane Greyhound Racing Club CEO) and I pretty much jumped him.

“It was the biggest win I have had as a trainer – I have never gone after a race like this before – so to win it is amazing and is something I will never forget.”

Mackellar and Fabregal will make the long flight home on Saturday, trophies and accolades in tow, with both girls looking forward to plenty of rest after pulling off the massive win.

“I am exhausted – but it’s a good exhausted,” Mackellar said.

“We are heading home tomorrow and we will probably give her a freshen up because she has had a big few weeks.

“There are no particular plans in store for her at the moment but we will have a look around and find something suitable.

“She is still learning how to race and she is still a baby, she only turned two last month, so we have plenty of time to figure out what’s next.”