WHEN James Porter made the decision to re-enter the racing industry after more than a decade on the sidelines, he never imagined how much his life would transform in such a short period of time.

Porter has has always had an interest in racing, originally trying his hand with the greyhounds as a teenager.

“Many year ago I hurt my back playing football and I started to pile on the weight,” Porter said.

“My dad gave me a friendly reminder that I was getting a bit chubby and that I wasn’t as fit as I used to be.

“We had often spoken about greyhounds and gone to the Maitland dogs – we ended up getting a few little bitches – they didn’t turn out much good – but we ended up breeding with them.

“I kept one dog from the first litter and his name was Plain James and he won 20 odd races for me.

“We ended up breeding again and we had a bit of misfortune with injuries – but at that point I was at the age where I was preoccupied with chasing women and driving fast cars so I was never at home to help dad out with the dogs.

“It got a bit much for dad doing it all by himself so he got out of the industry too.”

Over a decade later, major life changes led Porter back to the industry – this time he decided to try his luck within two different codes.

“I had a marriage break down and I was working for myself at the time with three different businesses – two building related as well as a Donut King shop,” he said.

“I was working around the clock and I was also a single dad of three kids five nights a week – but it got to the stage where I decided I needed to make a change.

“I sold all the businesses and took a regular manager’s job with an insurance building firm and with the money I got I decided to treat myself and I bought shares in a few dogs with K9 Racer Syndications.

“While I already had some dogs, I wanted something else – not only for dad to get into but for my kids to get into as well.

“My second cousin is Corey Brown and my dad and his dad used to break in some of the trouble horses in Sydney for some of the big trainers – and he has always been an avid punter – so I have a connection to the thoroughbred industry too.”

Porter purchased shares in two All American youngsters through Darby Syndications, with one of those, out of Condesaar, being a strapping filly, which now races as Yankee Rose. 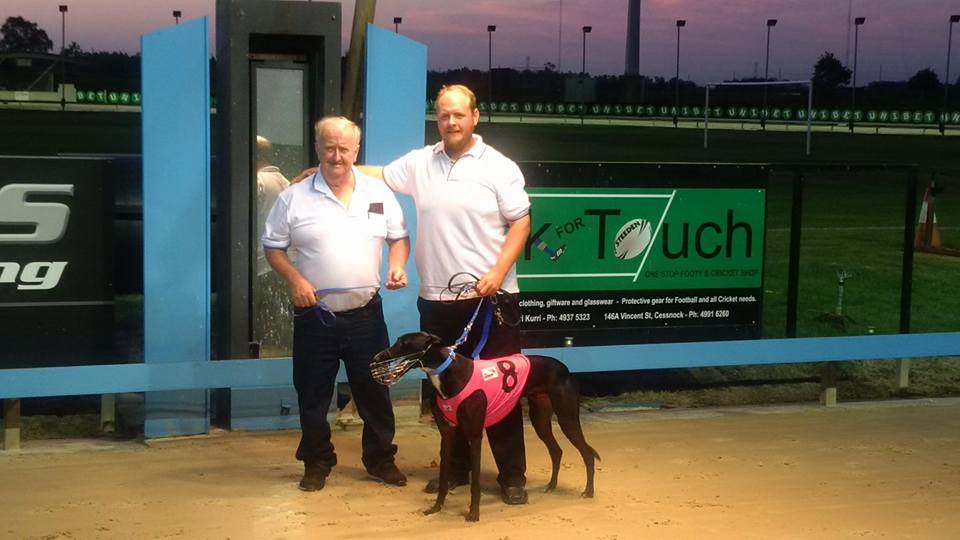 (James Porter, his biggest supporter father Dennis, and the pride of the kennel Carbon Racer)

Porter said it was a thrilling experience being a part of the winning team.

“I have been around tracks my whole life – but mostly on the provincials – so it was a whole new experience being at Royal Randwick as an owner,” he said.

“It was surreal – we got the red carpet treatment – I could have leant over the fence and kissed Yankee Rose we were that close to the action.

“It was very overwhelming but it was great – she is a very special filly – and I am very excited to see what she can do next.

“She is now the favourite for the Champagne Stakes on Saturday week – my suit is already dry cleaned and hanging back up – I’m ready to go.”

However, despite the glitz and glam of the Sport of Kings, the budding greyhound trainer conceded that another industry, often referred to as the Poor Man’s Sport, has stolen his heart.

“The dogs are where my heart is,” Porter said.

“It was great to win [the Sires Produce] it but at the end of the day it was a bit like supporting your football team when they win the Premiership – you get that happy happy feeling but lets face it I am not the one out there with the horse every morning putting in the hard yards.

“For that the guys at Darby Syndications and David Van Dyke really deserve all the pats on the back they can get.

“With the dogs on the other hand I am the person out there every day at 5am – I am in there and I am a part of it.

“There is no better feeling than knowing all your hard work has paid off when your dog wins – thats what gets me excited and thats why I have poured my heart and soul into what I am doing.”

And Porter hasn’t just dipped his toes into the greyhound racing industry, he has cannonballed straight into the deep end by buying a property, located in the NSW Hunter Valley, which he hopes to transform into his dream training establishment.

“I have worked very hard since I was 18 – but it got to the stage where I decided I wanted to do something which I enjoyed for the rest of my life,” he said.

“At 36 years old I realised I was too old to play football, too old to box, too old to play cricket – and the only time I have felt that same nervous rumble in my guts as when I was playing sport is when I put my dogs in the boxes on race day – its all about adrenaline.

“Originally I was just going to put up a small kennel block and have five or 10 dogs and then put a few pup runs in down the back just to pay for my interest.

“That has now ballooned. I currently have 30 new kennels going in and we have seven of 21 rearing paddocks already up, with slabs just being put down for spelling kennels.”

Since purchasing the land in December last year, Porter is seeing results, with 10 winners already throughout 2016 from just a small team in work.

His best greyhound at this stage is Carbon Racer (pictured) which is owned by K9 Racer Syndications and recently made the move to NSW after starting his career in Victoria with Ray Henness.

“I own a 25% share in him and we were offered a substantial amount of money for him as a pup – he was a very talented young dog,” Porter said.

“He has had a few problems on the track and he got a few hard knocks which sent him off a little bit.

“The decision was made about eight weeks ago that he needed a change of kennel. I told them I would like a chance to train him myself – but that I understood if he wanted to send the dog to a proven trainer such as Jason Mackay or Anthony Azzopardi – thankfully they were willing to give me a go.”

Carbon Racer subsequently joined Porter’s Greta kennel, near Maitland, and after half a dozen starts put it all together with a stunning 29.49 win over 515m at The Gardens last Friday.

The son of Don Chendo and Gimme Range returns to the same track this Thursday, with Porter hopeful of a similar performance.

Carbon Racer will start from box four in race six on Thursday night which is set to jump at 5:07pm.

“He is a confidence animal and he is just beaming with it at the moment so I really believe he has got every reason to replicate his run from last week.

“Hopefully within the next few starts it will be time to pack the bags and head down to Wenty with him to see what he is capable of doing down there.

“He is still learning and getting his confidence back – but once he puts it all together I think he is going to be capable of breaking track records – he is just that good.”

With his training dreams now looking a reality, Porter said he is thankful for the support of the racing fraternity, both Darby and K9 Racer Syndications, but most importantly from his father, Dennis, who has been an integral part of his racing journey.

“He is the biggest supporter I have – Carbon Racer could be racing in Dubai and dad would still be there,” Porter joked.

“The reason I bought into the dogs was to have something to do with him and for us to be able to share in something together and he has been instrumental in making this dream a reality – we are basically putting the whole place together by ourselves.

“I credit him for getting me back in the industry for which I will be eternally grateful, none of this would come close to being anywhere near as enjoyable if dad wasn’t here sharing it all with me.”