With a strong support card on Sunday evening, the crowd quickly built so did the anticipation to the Group 3 Climate Doctor Canberra Cup Final, the premier event in the Nation’s Capital racing calendar.

The racing kicked off with the maiden’s over 310 and 440, both producing some rough and tumble action, Sheeba Coluda and Berella Chelsea breaking through in their respective events to knock off their maidens.

Ken Staines continued his good run of form with Border Patrol going on for his second straight win since returning to racing. The blue dog producing a good performance of 17.89, beating Trimtex and Larappin Storm.

Before we knew it we were into the feature events of the evening with the Bit Chili 4/5th Grade final starting proceedings.

Put on by John Tyrrell, the final saw another smart performance by the two year, Jodie Gilbert trained, Sticky Boots, who received a lot of trouble early before working his way through the final to score by half a length over Sweet Rayah another neck back to early leader Mancunian Kool in 25.66.

Having attempted the Cannonball last year, Bells Fair returned this year for the Anytime Fitness event and proved experience is a charm.

The Collision x Fair Hazard black dog stepping with early leader and race favourite Bradman’s Willow, and remained on the red rug dog’s hammer before kicking on with it in the straight to win by a length, Bradman’s Willow holding on to second by a nose from Dulcie’s Cherry, 17.92 the overall race time.

Third final for the evening saw the up and comers over the 530 feature in the Bo Frazier final.

Scoring the same box as he had in the heats, Great Ghandu knew exactly what had to be achieved and met connections expectations beginning the best early, leading from start to finish in a smart 30.61 performance over Liana Pronto and War Machine, the black dog returning a solid $6 dividend to astute punters.

The feature event of the night attracting close to 300 spectators trackside, for what is likely to be remembered as an open final.

As the greyhounds loaded into the boxes favourite True Kihael shortened again and everyone was ready for the Group 3 event. 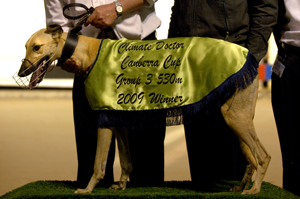 The lids lifted and it was Orange based Runaway Promises who cleared the boxes the best to lead at the all important first turn, clocking a 4.96 first mark, as they whistled through the pen the Elite State x More To Life bitch continued to punch out the solid times, 12.71, 19.31, and despite Mighty Albert trying his hardest to pick her up, fawn bitch stopped the clock at 30.41.

With owner trainer, Andrew Jones unable to attend due to family commitments the glory was all that of family members Steve and Josh, who are likely to keep Andrew from attending any future group events for lucks sake.

The central west clan thanking sponsors, officials and supporters as well as the impressive greyhound that is now likely to have a crack at the Paws Of Thunder title before being retired for breeding.

As the excitement subsided the remainder of the program ticked over in fine fashion with a strong win to Sir Pedro for Mark Chalker and the Bluey Syndicate.

The blue dog returning to the ACT after a stint in the GRV GOBIS Maiden series at the Meadows, just holding on by a half head in 30.88 over Vallee Rattler and Black Pop.

Iigloo Osti for Lorraine Roy returned to racing in fine form with a B.O.N 17.86 over Teeny Tiny who lunged hard at the line, Cool Aussie coming in third.

Ken Staines rounding out the program, taking his night’s tally to three wins with Exotic Ghost and Vidar Izmir winning.

Canberra now goes into recess for 4 weeks, and will return to racing on 18th October. Trial times during time off can be found on the website.