THIS week’s review of litters selected from the NSW Whelping Report for the week ending November 30, 2015 starts with a nice litter of 11 pups by the 2012 Golden Easter Egg winner, Don’t Knocka Him (November 2009 Knocka Norris x Surf Queen).

She is from a litter which included Bart The Weapon, Clubs The Weapon, Cyndi The Weapon, Gail The Weapon and Ricky The Weapon, with their dam having five other named offspring on file, from two litters, whelped in April 2009 by Mogambo and November 2011 by Tuiaki, both producing winners.

According to my breeding records, she has two previous litters on file, five dogs and four bitches, whelped in November 2013, by Swift Fancy, then seven dogs and one bitch, whelped in July 2014, by Don’t Knocka Him, so Neville must like the first Don’t Knocka Him litter, to have gone back to him again.

This litter should attract plenty of interest from prospective buyers with future breeding in mind, with eight bitches in the litter, and the strong early winning form of her Swift Fancy litter, which includes Boo, Bully The Weapon, Carla The Weapon, Carol The Weapon, Disturbance, Mighty Mia, Musheen and Rosco The Weapon, who according to my records have all won races.

NEXT we have a litter of seven pups by the successful US bred sire Kinloch Brae* (August 2005 Craigie Mo Town x Greys Free Style) who stands at stud in Ireland, and who added the Group 1 Golden Easter Egg to his Australian CV last week with the win of the Jason Thompson trained, Moreira (x Donna Ricca) in the final. 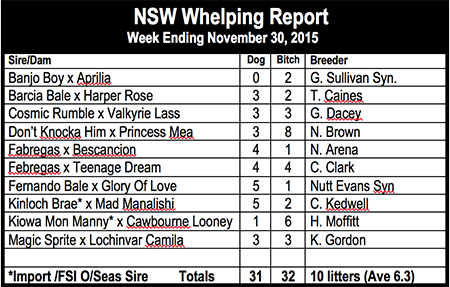 She is already a well proven producer, with her second litter, the first of two by El Grand Senor, producing Aldersea, Atrax Robustus, Karma Connie, Katherine Sky, Kyanos, Maximum Entropy, Miss Mensch and Mister Renda, who have won more than 60 races between them to date.

Gunning breeder, Hayley Moffitt has a litter of seven pups in the list this week that should create plenty of interest amongst prospective buyers with future breeding in mind.

Cawbourne Looney, a finalist in the 2013 Group 3 Chairmans Cup and 2014 group 2 Wentworth Gold Cup, is from a handy litter of six named, which included, Cawbourne Bree, Double Bubble, Miss Grobur, Riley Peterson and Ritza Special, with their dam, Book Of Days, also producing winners from both of her other litters, October 2012 by College Causeway* and March 2014 by Spring Gun.

According to my breeding records, she has one previous litter on file, seven dogs and three bitches, whelped in August 2014, by Collision, who will be well worth keeping a look out for when they hit the tracks, which should be very soon. 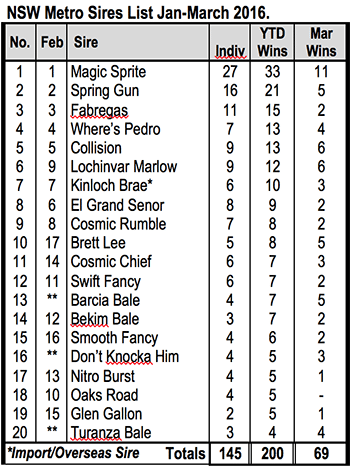 She has one previous litter on file, three dogs and two bitches, whelped in June 2014, by Knocka Norris, with Reservoir Risk having already raced and won two of his first three starts on my records, at the time of writing.

She is from a litter which included, Blue Shiraz, Boston Babe, Boston Hustler, Tantrum and Wine Not, with their dam also producing winners from her two other litters, whelped in June 2012 by Lonesome Cry* and October 2013 by Surf Lorian.

She has one previous litter on file, six dogs and three bitches, whelped in December 2014, by Jarvis Bale, bred by Horsley Park breeder, Sandro Bechini.

Glenda Bale is from a litter which included Bestie Bale, Driton Bale, Duratec Bale, Eira Bale and Fizzle Bale, with their dam also producing winners from both of her other litters, by Buttsie Bale and Droopys Maldini*.

She has two named offspring on file, George Mist and Time Taker, both winners, from her first litter, whelped in July 2013, by Razldazl George*.

She is from a litter of seven named, which included Baraka Kahn, Bojack Kahn, Courtly Kahn, Jetta Kahn, Te Akai Kahn and Von Costa Kahn, with their dam also producing winners from her two other litters, whelped in December 2012 by Just The Best, and January 2014 by Bartrim Bale.

Her wins included the 2014 Group 1 National Futurity, Group 2 Richmond Oaks, and 2015 Dapto Oaks, and she was a finalist in the 2015 Group 1 Megastar, Group 3 Canberra Cup and Group 2 Bob Payne Spring Stake. 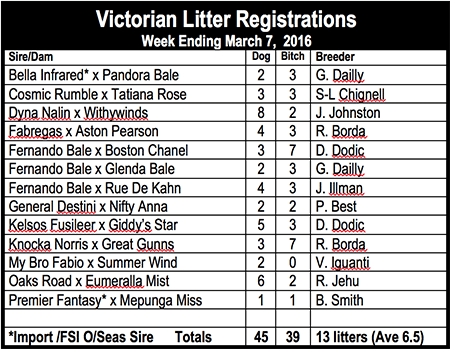 Giddy’s Star is from a litter which included, Coolan, Coolan Blue, Coolan Queen, Superior Ashlee, Superior Hailey and Wendy, with their dam, Giddigan, also producing winners from her four other litters, by Collision, Dyna Lachlan, Meticulous and Pure Octane.

She has three dogs and three bitches on file from one previous litter, whelped in October 2014 by National Sprint Championship winner Fabregas, so Dragan certainly has some beautifully bred pups in his kennels at the moment.

She has proven herself to be a very good producer with winners from her first two litters, whelped in October 2012, by Kinloch Brae* with five named all winning, Bremer, Glock, Gunloch, Sig Saeur and Smith And Weston, and eight winners from nine named in her second litter, whelped in July 2013, by Collision, which produced Aston Kara, Aston Simone, Aston Skeet, Aston Taj, Aston Ugo, Aston Willow, Captain Tuttle and Chekky Danae.

She also has a litter of two dogs and six bitches on file, whelped in September 2014, by National Sprint Championship winner Fabregas which should provide her with even more success, and she could even end up emulating the feats of her top producing dam.

Eight for the Road

OUR final litter for review this week, from the Victorian list is one of eight pups by the under-rated sire, Oaks Road (November 2008 Spiral Nikita* x Leprechaun Pace) who I believe should have had a lot more bitches than he has.

Eumerella Mist is from a litter of three named which included, Eumeralla View and Grand Ocean, with their dam’s five other named offspring on file, from her February 2013 litter by Cosmic Chief, which produced, Eumeralla Flash, Eumeralla Magic, Eumeralla Rex, Lil Arthur (10 plus wins) and Memphis Magic.

Lightly raced, Eumerella Mist raced only 11 times for two wins and three placings, winning twice over 390m at Ballarat (22.11) with two placings, and two placings over 400m at Geelong.

He now leads with 33 wins (from 27 individual winners), and has a handy 12 win break over Spring Gun who has 21 wins, Fabregas 15 wins, then Where’s Pedro and Collision, both with 13 wins each completing the top five.

Lochinvar Marlow, who along with Collision, had six March winners, is just one win outside the top five, with Irish based sire Kinloch Brae* just two wins behind in seventh spot, and both looking likely top five contenders as the year progresses.

Just outside the top 20 at the end of March both with four wins each but less placings, are Big Daddy Cool and Miagi, followed by a group all with three wins each, Head Bound*, Surf Lorian, Bombastic Shiraz, Collide, Fear Zafonic*, Go Wild Teddy, Mogambo and Dyna Lachlan.

Winners for the top three March sires at Wentworth Park, and their dam, were as follows:

Next week we will have the full Victorian Metropolitan Sires list for the three months to the end of March, but I can tell you briefly, the top five on the list are Barcia Bale, 64 wins, Cosmic Rumble 46 wins, Magic Sprite 37 wins, Kinloch Brae* 35 wins, and Fabregas jumped five places to fifth with 32 wins, after his offspring won 20 races for the month, the same as list leader Barcia Bale.

Next week we will also have the AGRA breeding ratings for the three months to the end of March for both Sires and Dam, with both lists compiled on a points score basis in Group races only.

LITTLE SHORT (March 2014 Jarvis Bale x Alana Miss) is the first of our two dogs to watch this week after placings at his first two starts, a first up third over 525m at The Meadows (MEP) on March 23, beaten 13 lengths in the race won by Spring Clarkie, after coming from box five recording 31.15, then an eyecatching second from box 1 at The Meadows (MEP) on March 30, beaten 3.36 lengths by Brazen Fool, running 30.82, and he will improve on that before too long for Lara owner/trainer J. Collins.

QUEENSLAND bred bitch, Lilly Of Laguna (January 2014 Collision x Dazzling Pace) caught the eye with a first up fourth over 525m at The Meadows (MEP) on March 30, from box four, beaten six lengths in the race won by Brazen Fool, who ran 30.58, and with a better draw and a bit of luck won’t take long to find the winner’s list.