She is from a litter of four named, which included Mepunga Sambo, Mepunga Sammy and Pure Harmony, with their dam also producing winners from each of her three other litters, whelped in October 2011 by Premier Fantasy*, March 2013 by Fear Zafonic* and December 2013 by Barcia Bale.

In addition to her Group 1 Maturity win, she also won the 2014 Damsels Dash and was a finalist in the Group 1 Topgun, Group 2 WA Oaks and Group 3 SA Oaks.

Unfortunately she only has one other offspring on file, a dog pup, whelped in October 2015, by Premier Fantasy*.

Their dam, Obama Beauty, only has one other litter on file, whelped in February 2014, by Elite State, which produced Black Label, Elite Obama, Jack Of Meade, Kansas City, Kev’s Choice and Obama Flyer. 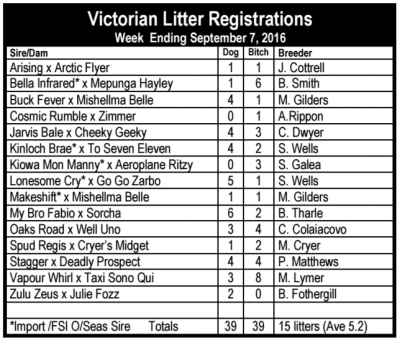 NAGAMBIE breeder, Sharon Wells, has two nice litters on this week’s list, both by well bred, highly rated international sires, with a total of 12 pups from the two litters.

To Seven Eleven is from a handy litter, which included Critical Path, Disappear, Kingburi, Paua To Charge, Paua To Excite, Paua To Thrill and Senor Pete, with their dam also producing winners from her four other litters, by Barcia Bale, Fabregas, Fear Zafonic* and Knocka Norris, then she has just the one named to date from her March 2015 litter by Kinloch Brae*.

She is from a litter of four named, which included Donni Danger, Inara and Little Ralphy, with their dam having eight other named offspring on file, from three litters, by El Galo, Spring Gun and Surf Lorian.

Go Go Zarbo raced 54 times for two wins and 21 placings, winning over 450 metres at Shepparton (25.77), where she was also placed 13 times, and placed three times over 390 metres, and 425 metres at Bendigo (24.55) with two placings, and two placings over 500 metres, and with a little more luck in running her record could have been a lot better.

Seven for the Road

She is from a litter of six named, which included My Girl Uno, Mrs Griff, Shelly Shelby, Sparty and Uno Emi, with their dam also producing winners from two litters by Bombastic Shiraz and other litters by Hallucinate, Surf Lorian and Westmead Osprey*.

OUR final litter for review from this week’s Victorian list has 11 pups, by the well bred, successful, but under-rated sir, Vapour Whirl (May 2003 Ashigga x Broad Band).

She is from a litter which included Baja Fantasy, Helen Told You, Helen’s Fantasy, Hellbent Lad and Who Told Lachie, with their dam also producing some very good winners from her two other litters, whelped in March 2011 by El Galo and October 2013 by Cosmic Rumble.

TURNING our attention to the NSW Whelping Report for the week ending May 22, our first litter for review is a beautifully bred litter of 12 pups, by highly rated stud prospect, Awesome Project (March 2011 Collision x Honour Phase), which should create plenty of interest from prospective buyers, especially those with future breeding in mind.

She is from a very good litter, which included Electroglide, Goodwin Dell, Goodwin Robyn, Jezzadora, Lady Isadora and No Doubt, with their dam’s only other litter on file, whelped in September 2010 by Where’s Pedro, producing Goodwin Future, Isa Factor, Paint It Black and Where’s Dora.

Her career as a brood bitch got off to a good start, when her first litter, whelped in July 2012, by Brett Lee, produced Ay Goodes, Big Black Doll, King Doll and Queen Doll, all winners, followed by successful litters whelped in July 2013 by Go Wild Teddy and July 2014 by Collision, then she whelped a litter of five dogs and two bitches in May 2015, by Fabregas.

David’s got a Fever 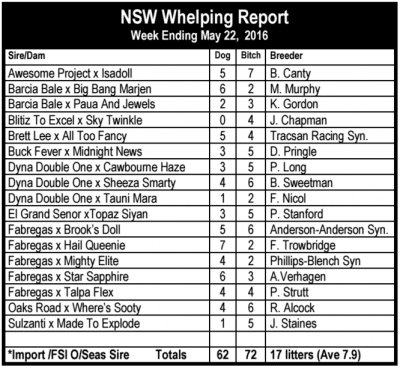 CLERGATE breeder, David Pringle has a nice litter of seven pups on the list this week, by the under-rated sire, Buck Fever (December 2009 Brett Lee x Kiacatoo Pearl) who seems to be coming under increasing notice from breeders in recent months.

She is from a handy litter, which included Barney’s Magic, Berry Milkshake, Freddy’s Smile, Midnight Cuppa, Midnight Dollars, Motown Girl, Silent Battle and Young And Main, with their prolific producing dam also throwing winners from her five other litters, by Barcia Bale, Brett Lee, Buck Fever, Collision and Where’s Pedro, with a total of 42 named offspring from her six litters.

The bloodline of this litter is already proven, with Midnight Movie’s own litter by Buck Fever, whelped in October 2013 producing Bourbski Fever, Buckette, Midnight Moments and Movie Fever, all winners.

She is from a handy litter of 12 named, which included Alpinador, Brutus, Creative Mojo, Diamond Siyan, Eddie Eddie Ed, Fantasia Dream, Ikkina, Moonstone Siyan, Premier Innings, Premier Keeper and Whatta Innings, with their dam also producing winners from both of her other litters, whelped in August 2007 by Token Prince and April 2013 by Cosmic Rumble.

Topaz Siyan is already a proven producer, with some very handy winners from her first two litters, whelped in July 2012 by Collision and February 2014 by Swift Fancy.

On the Road again

BELIMBRA PARK breeder, Ronald Alcock, has a litter of 10 pups on the list this week by Oaks Road (November 2008 Spiral Nikita* x Leprechaun Pace) which should create plenty of interest from prospective buyers with future breeding in mind.

The four dogs and six bitches are from the well bred bitch, Where’s Sooty (December 2009 Where’s Pedro x Wind It Up), whose dam is by Collision x Albazar (Head Honcho x Salmazar).

She was the only pup named from her litter and her dam has some other good winners on file from her 14 other named offspring from two litters, whelped in May 2011 by Magic Sprite and September 2012 by Cosmic Rumble.

Where’s Sooty raced 23 times for four wins and nine placings, winning twice over 274 metres at Appin and twice over 400 metres at Richmond (23.09).

She already has winners on file from her first litter, whelped in December 2013, also by Oaks Road, which has six named, all winning, Holmes, Khumba, Soaky Oaks, Sookie Oak, Spotty Oak and Switch Colours.

Sulzanti is from a litter which included Cleanser, Denali Prince, Pink Scissors, Professor and Sheza Sensation, with their dam’s only other litter on file, whelped in September 2014 by Fabregas including, Assess, Cogburn, La Reina, Reviewer and Xavi.

John’s litter is one dog and five bitches, from the well bred bitch, Made To Explode (April 2010 Made To Size x Walkabout Roxy), whose dam is by Solve The Puzzle x Rema’s World (World Title x Princess Rema).

Made To Explode is from her dam’s only litter, of five named, which included Made To Command, Made To Power, Medium To Large and Slim Fit.

STUD Service figures released by GRNSW for the month of May showed a total of 31 services registered, from 17 different sires, with multiple services registered by Dyna Double One with five, Barcia Bale with four, Fernando Bale and Magic Sprite with three each, then Fabregas, Kinloch Brae* and Lochinvar Marlow with two each.

Looking at the figures for the five months to the end of May, Dyna Double One has clearly been the most popular sire with breeders, with 33 services, followed by Barcia Bale with 22, Fabregas 19, Fernando Bale 14, Magic Sprite 13, Don’t Knocka Him nine, El Grand Senor eight, Kinloch Brae* and Swift Fancy with seven each, Dyna Villa six, Bekim Bale and Cosmic Rumble with five each, Banjo Boy, Collision, Kiowa Mon Manny*, My Bro Fabio and Spring Gun with four each, Buck Fever, Hay Fergus, Keybow, Kiowa Producer* Lochinvar Marlow, Sulzanti and Where’s Pedro with three each, and Awesome Project, Black Magic Opal, Brett Lee, Jarvis Bale, KC And All, Oaks Road, Shakey Jakey, Shoulders and Taylors Sky* with two each. 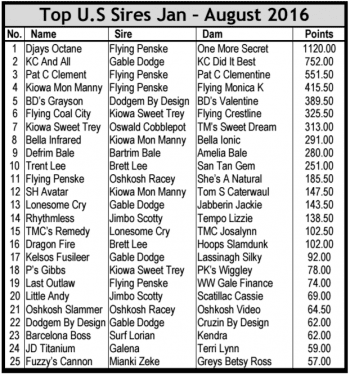 FOLLOWING on from last week’s English-Irish Sires List, this week we have a look at the US Sires List for the eight months to the end of August.

Australian bred sires certainly don’t have the presence in the US that they do in England and Ireland, and the influence US sires are now having on the Australian breeding industry is clear with the number of sires on the list with pups on the ground here.

Only one Australian born sire, the beautifully bred, Defrim Bale (October 2009 Bartrim Bale x Amelia Bale), whose dam is by Sonic Flight* x Evonne Bale (Light Of Fire x Frosty Bale) has a place in the top 25 on the list, with Dragon Fire (Brett Lee x Hoops Slamdunk) and Barcelona Boss (Surf Lorian x Kendra) the only other sires in the top 25 by an Australian bred sire.

UNFORTUNATELY next week there will be no Talking Breeding, with this week’s column being the last.

Talking Breeding has fallen victim of cutbacks caused by the industry downturn in NSW since the disastrous decision by the State Government to ban Greyhound Racing in NSW from July next year.

There is still a lot of water to go under the bridge before that happens, but it is what it is at the moment.

Who knows where it will end, certainly not me, but I would like to thank Australian Racing Greyhound for their support of Talking Breeding over the past eight months, since the closure of National Greyhound Form.

Anyone who needs to contact me with issues related to the published editions of Talking Breeding can do so on my private email, [email protected]