THIS week’s review of litters selected from the NSW Whelping Report for the week ending December 17, 2015 starts with two litters registered by Churchable breeder, Casey Dargusch, with a total of 16 pups.

Gold Earner is from a litter of five named, which included, Hostile, She’s Got Issues, Stylin’up and Twist Of Blue, with their dam, Restless Style also having winners on file from her June 2013 litter by Barcia Bale and one named offspring from her June 1010 by Where’s Pedro, which was Gangster’s Guess who raced 36 times for two wins and 10 placings.

Gold Earner raced 33 times for five wins and 15 placings, winning three times over 380m at Townsville, where she also won twice over 498m.

Hostile won the listed 2014 Cup night Sprint at Sandown, ran third in the 2015 Group 1 Australian Cup and was a finalist in the Group 2 Cranbourne Cup, with his 36 starts resulting in 13 wins and 13 placings. 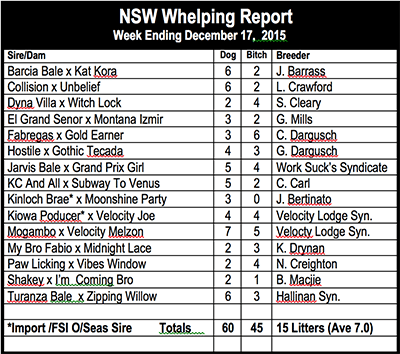 NEXT we have two litters, registered by the Velocity Lodge Syndicate, from Eli Waters, with eight pups in the first litter, by the highly rated Australian/US bred import, the 2013 All American and three time major winner, Kiowa Producer* (April 2011 Dragon Fire x Kay V Sweet Kay*) whose US dam is by Flying Penske x Flying Sweet Ann.

According to my breeding records she has one previous litter of four dogs and one bitch, whelped in March 2015 by the extremely successful sire Barcia Bale.

Velocity Melzon is from a litter of three named, which included, Cry Harry and Lonesome Jeff, with their dam, Seize The Moment, also producing winners from both of her other litters, whelped in March 2011 by Bombastic Shiraz and March 2014 by Brett Lee.

OUR final litter for review from this week’s NSW Whelping Report is one of nine pups, registered by the Hallinan Syndicate, from Clergate, by Turanza Bale (July 2006 Primo Uno x Daishi Bale).

She won the Group 3 Canberra Cup and Group 3 Ladies Bracelet, finished second in the Richmond Oaks and was a finalist in the Group 1 Topgun and Group 2 Black Top in what was an outstanding career on the track. 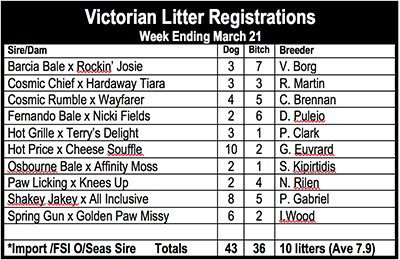 Rockin’ Josie is from a litter of four named which included, Black Haden, Speedie Rioli and Tan Tiki, with their dam’s only other litter on file, whelped in January 2011 by Andy Palmer, having three named, Lexia, Machida and Makeeda.

Certainly plenty to like about the pedigree of these well bred youngsters, and with their dam’s strong middle distance form on both city tracks, and a 725m win at The Meadows, combined with the fact there are seven bitches in the litter, there should be plenty of interest from prospective buyers with future breeding in mind.

NEXT we have a nice litter of eight pups by the under-rated sire Spring Gun (June 2009 Bombastic Shiraz x Ready For Rain) who only had 10 matings registered in Victoria in 2015, as you will see in the full year stud service statistics elsewhere in this week’s Talking Breeding.

TOOLERN VALE breeder, Peter Gabriel has his hands full with our next litter for review, with 13 pups, by Shakey Jakey (May 2012 Collision x Kiacatoo Pearl).

She is from a litter of five named, which included, Certainly Is, Doo Ron, Jay Brown and Scaramanga, with their dam’s only three other named offspring, coming from two litters, whelped in November 2009 by Watch The Web and December 2010 by True Kihael.

Her career as a brood bitch has got off to a good start with winners from both of her two litters to date, whelped in March 2014 by Bekim Bale and January 2014 by Taylors Sky*.

She has one previous litter on file, two dogs and four bitches, whelped in August 2014 by Barcia Bale.

Hostile’s track career was profiled in our first reviews this week, with his litter of four dogs and three bitches, from Gothic Texada, registered by Casey Dargusch.

STUD Services registered with GRV for the month of December 2015 showed that Cosmic Rumble and Fernando Bale were the most popular with breeders during the last month of the year with five services each, followed by Barcia Bale with four, Kinloch Brae* and My Bro Fabio with three each, then Banjo Boy, Bomber Jack, Dyna Double One, Group Skater*, Jagger Swagger, Kiowa Producer* and Stagger, with two each completing the list of all sires with multiple services.

Looking at the cumulative totals for the full year 2015, Barcia Bale topped the list in Victoria with 42 services, followed by Cosmic Rumble with 36, Fabregas 24, Banjo Boy and Nolen with 20 each, Bekim Bale 15, Fernando Bale 14, My Bro Fabio 13, Kinloch Brae* and Magic Sprite with 12 each, Stagger 11, then Premier Boloney and Spring Gun with 10 each completing the list of all sires in double figures.

Let us now look at the full list of all sires with registered services in Victoria in 2015, in alphabetical order, with the two figures for each sire, representing their services in December, then the full year 2015.

Next week we will have the December figures and the full year figures for all sires registered in NSW during 2015.

AGRA breeding rankings, based on a points system applied to group races on a sliding scale of points from first to eighth, are released at the end of each month, on a calendar year basis.

The top 20 AGRA rated brood bitches at the end of March were: Crystin Bale 13 points, Teddy’s Jackpot and Donna Ricca 12 each, Chevy Princess and Jaydo’s Neglect 11 each, Kara Janx 10, Jacki’s Capri, Fascinate Marina and Flash Fancy 9 each, Light Fantastic, Mrs. Trickett, Paua Of Love, Cawbourne Shine and Zambola Bale 8 each, Break Even, Rockin’ Along, Proper Lucy, West On Bluebird and Dyna Gala 7 each, then Tania Two Shoes, Wildcard Lass, No recall and Oh Cee Ya all with 6 points each.

JUST how good is he? Was the question on everyone’s lips after Burn One Down (January 2014 Buck Fever x Fancy Jaffa) burned up the track to break his maiden status at Sandown last Sunday, winning by more than 18 lengths and stopping the clock at a blistering 29.16, the fastest time ever recorded by a maiden winner at the track.

Owned by David Pringle and trained by Jason Thompson, Burn One Down was having his fourth race start, following a first up fifth over 301m at Coonamble on October 3, beaten 12.75 lengths, fifth over 535m at Richmond on November 11, beaten 13.75 lengths and sixth at Sandown on April 10, beaten 17.6 lengths in the race won by our first Bred to win greyhound, Pee Cripps.

Burn One Down began fairly and got to the front early to race away and win by 18 lengths, and whilst the knockers might say, it was only a maiden? Well let me tell you no maiden has ever run that time at Sandown and I expect this beautifully bred youngster to go on to much bigger and better things.

OUR second Bred to win greyhound this week is Canal Court (March 2014 Jarvis Bale x Scusami Hotel), owned by Des Fegan and trained for him at Ringwood by astute mentor Peter Wishart.

Canal Court finished last from box three over 600m at a midweek meeting at The Meadows on March 2, beaten 19 lengths by Dr. Sherlock, running 36.01 before returning after a short break over 515m at Sandown last Sunday, from Box five, running second behind Coolan Man (30.14), beaten by 7.2 lengths.

That was a much better effort and I expect him to improve even further in a similar event in the coming weeks, although keep an eye out for him in case he pops up in a country maiden somewhere, which would be a lot easier than he’s taken on so far.

Our first Bred to Win greyhound, Pee Cripps (Banjo Boy x Elusive Lomar) made it two in a row and two wins, with three placings from seven starts, with an impressive 2.6 lengths win over Hoof It (29.79) at the same meeting.

RECEIVED an email from Central Coast breeder Loren Harborne this week, with some great photos, of her recently arrived litter of nine pups by El Grand Senor from the well bred bitch Winsome Courtney.

We will have a full review of the litter for you next week in Talking Breeding with a couple of great photos, and remind all readers to send emails with news of litter arrivals, or questions, to [email protected]

Please note, for newer readers, my long standing rule on not offering advice on which sires to use for particular brood bitches, which has been the rule for 30 years now, as I believe in giving all sires an equal opportunity to have their litters reviewed, and generally select litters for review that have a number of bitches that are likely to be for sale, and that prospective buyers may be interested in breeding with.

We regret to advise we have made no progress at all in negotiations with Greyhound Racing Queensland regarding litter notifications and are particularly keen to get news on litters whelped in Queensland.