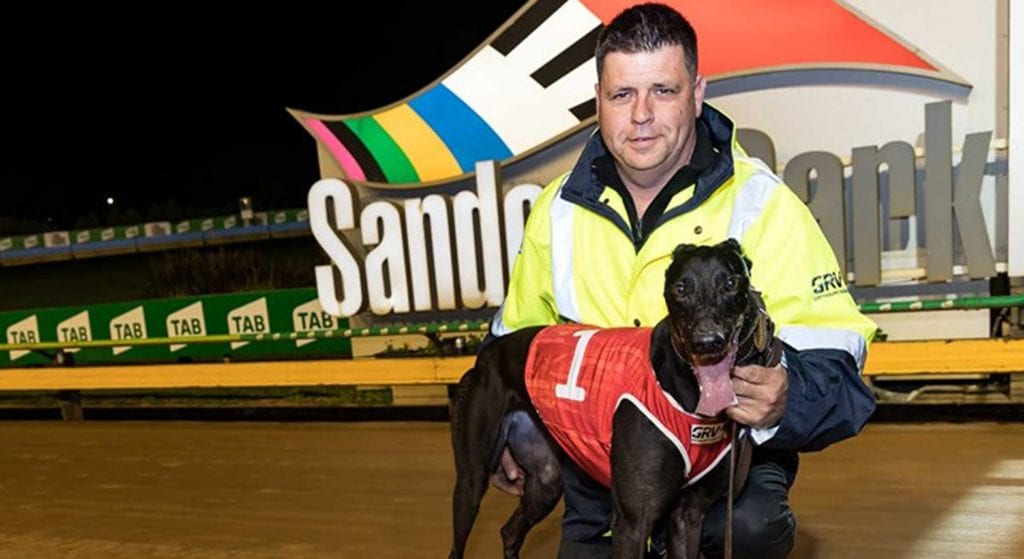 Sweet As Emm showed her trademark turn of foot to give trainer Brendan Pursell a belated birthday present at Sandown Park last night.

A day after celebrating his 48th birthday, Pursell watched on as Sweet As Emm took full advantage of box 1 to record her 12th career victory and maintain her perfect record in the red vest.

“She’s really at her top at the moment,” said Pursell.

“She just needed that gap at the first turn to be close enough. Last week at Geelong she flew down the back straight after being last at the winning post the first turn, it’s just crazy.”

Sweet As Emm stepped fairly from the inside draw before railing strongly to improve to third position entering the back straight. She loomed up ominously passing the 595m boxes and when leader Courting rolled off the rail turning for home, Sweet As Emm capitalised, powering to the line 2.5 lengths clear in 29.36.

Pursell now has multiple options for the versatile Sweet As Emm. Her winning time put her into 17th place in the 515m Speed Star standings, and she is also 9th on the 595m leaderboard for the match race series on Sunday 15 September. There’s also the prospect of contesting the Million Dollar Chase before again embarking on a staying campaign.

“We’ve dropped her back over the 500 for a while, and hopefully with a bit more age she’ll get back over the trip, that’s the idea.

“But for now, I dunno yet. The Speed Star would be perfect for her – it’d be interesting to see what she can run with a clear run. I’ll have to speak to the owner.”

The final round of Speed Star qualification trials will be run on Sunday 8 September. Nominations for the $190,000 series close at 10am on Wednesday.