THIS week’s review of litters selected from the NSW Whelping Report, for the week ending September 30, starts with a nice litter of 10 pups by Cosmic Rumble (April 2007 Spiral Nikita* x Spiritual Rumble).

She is from a litter which included La Perro, Ace King, Jimmy Recard, Lagoon Roxy, Shaharanee and Where’s Smylee. Their dam, Lagoon Smylee also has winners on file from her other litters, by Cosmic Rumble, Magic Sprite, Ninja Jamie* and Swift Fancy. 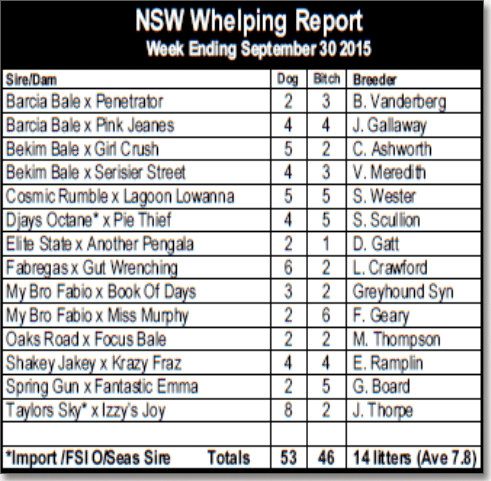 She has two previous litters on file, with winners from four named in her first litter, whelped in October 2013 by Dyna Lachlan, then one named from her June 2014 litter by Barcia Bale.