She is from a litter which included, Almost Magic, Effective Power, High Percentage, Honour Promise, Steel The Best, Wild Effective and Yolo’s Magic, with their dam’s only other litter on file, whelped in August 2012, by Cosmic Rumble, producing All Apache, Effective Miss, Got Held Up, Hidden Effective, Oh So Striking, Silent Effective and Better Call Sloy, with all but one (Effective Miss) of her 15 named offspring winning races.

Anakie breeder Sean Cachia has the second Barcia Bale litter, which has three dogs and five bitches from the beautifully bred bitch, Ima Pearl (March 2012 Collision x Pearlee Surprise), whose dam is by Brett Lee x I’m Puzzles (Head Honcho x Malawi) and worth recalling that Pearlee Surprise is sister to successful, but under-rated sire, Superman, from a different litter.

Ima Pearl is from a handy litter which included, Access, Bomber Attack, Campaspe Will, Four Paw Glory, Lorraine Lee and Tackfire, with their dam also producing winners from both of her other litters, whelped in October 2007 by Whisky Assassin, then May 2009 by Premier Fantasy*, which included Beautiful Noise, Carlow Queen, Croxton Lass, Lever Footprint (who has a litter on the list this week), Miss Dynasty, Premium Fantasy, Sweet To Meet and the prolific winner, now successful producer Tania Two Shoes.

On the track, Ima Pearl only raced twice for a win over 450 metres at Ballarat (25.60) in April 2014 and she was retired after finishing seventh there the following week, and found to be injured.

She is from a litter of three named, which included Cocktail Party and Powerful Girl, with their successful producing dam having winners on file from each of her three other litters, whelped in January 2007 by Brett Lee, October 2007 bySpiral Nikita*, then May 2009 and November 2010 by Bombastic Shiraz.

NEXT we have a nice litter of nine pups by the consistently successful US sire Kelsos Fusileer* (July 2003 Gable Dodge) who made his name here as the sire of champion sprinter Fernando Bale (March 2013 x Chloe Allen) who is top rated offspring, worldwide, according to greyhound-data.com.

Registered by Royce Keirl, for the Royce and Josh Keirl syndicate, the four dogs and five bitches in this litter are from the well bred bitch, Blonde Oasis (April 2012 Where’s Pedro x Weir Park), whose dam is by Awesome Assassin x Brandeen Misty (Prince Of Tigers x Miss Cleopatra).

She is from a handy litter which included, Magnum Oasis, Serengeti Oasis, Shady Oasis, Tiny Oasis and Tropical Oasis, with their dam producing winners from each of her three other litters, whelped in January 2009 by Bond, December 2006 by Hallucinate and September 2010 by Premier Fantasy* 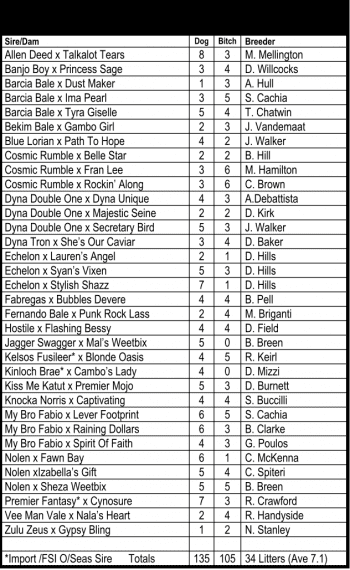 Nolen is from a handy litter, which included Ballisimo, Cee Waller, Donna Ricca, Pah Leeze and Wrecking Crew, with their dam also producing winners from her four other litters, whelped in May 2010 by Bit Chili, August 2011 by Elite State and September 2012 by Cosmic Rumble.

She is from a litter of four named, which included Bay Time, Black Opal Boy and Tuiaki Bay with their dam’s only other litter, whelped in March 2014 by Billy The Sid, producing winners.

She is from a litter which included, Burnley Fox, Major Fantasy, Moscardo Dragon and Shinari, with their dam producing winners from both of her other litters, whelped in October 2012 by Cosmic Rumble and January 2014 by Magic Sprite.

She is from a litter which included Fierce Weetbix, Fierce Wetbix, I’m All Weetbix, Sheza Weetbix, Weetbix Crunch, Weetbix Prince and Weetbix Spirit.

She has one previous litter on file, five dogs and five bitches, whelped in December 2013, by El Galo.

She is from her dam’s only other litter, which included Another Weetbix, It’s A Blur, Pure Instinct and Weetbix Kid, so there is plenty to like about both of these litters, Barbara, given the dam’s pedigree, and her ability to produce winners.

WE have mentioned Irish born, international stud success, Premier Fantasy* (April 2002 Premier County x Nifty Nyamh) a few times this week, as we do most weeks, such is his success in Australia, and we conclude this week’s review of litters from the Victorian list, with a litter of ten pups of his, registered by Pearcedale breeder, Robert Crawford.

She has one previous litter on file, whelped in February 2015, by Barcia Bale, which was bred by Geoffrey Slattery. 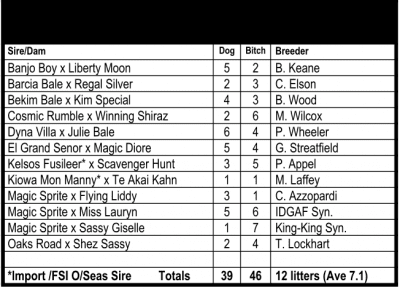 TURNING our attention to the NSW Whelping Report for the week ending March 6, our first litter selected for review is a nice litter of seven pups by Bekim Bale (October 2009 Bartrim Bale x Amelia Bale).

She is from a litter which included Al’s Special, Belle Special, Special Annie, Special Kath and Willie Special, with their dam having success with both of her other litters on file, whelped in May 2011 by Velocette and December 2012 by Magic Sprite.

Kim Special did all of her racing in W.A where she raced 37 times for nine wins and 10 placings, with all but three starts over 405 metres at Mandurah where she won all nine times (22.61).

She has six named offspring, Amburrido, Our Mandalai, Sudoko Baby, Sudoko Bomb, Sudoko Bullet and Sudoko Flash, who were whelped in November 2014 by Cosmic Rumble.

COINCIDENTALLY, our next litter for review, is one of eight by Golden Easter Egg winner Cosmic Rumble (April 2007 Spiral Nikita x Spiritual Rumble).

She is from a handy litter which included Amazing Phantom, Dawn Breaker, Perfect Phantom, Running Issue and Smiling Shiraz, with their dam having two other litters on file, whelped in March 2003 and July 2004 with no other details available.

She has proved to be an outstanding producer from her first two litters, the first, whelped in March 2011 by Knocka Norris, included Buster Shiraz, Cool Maddie Ross, Coonawarra Gold, Highly Respected, Knocka’s Return, Natural Player and Winning Knocka, who all won, with more than 60 wins between them.

Her second litter, whelped in November 2013 by Magic Sprite, produced Combined Effort, Molly Dawes, Sweetwater Boy, Titan Sprite and Winning Kocka, who again have all won races, with more than 40 wins in total.

She is from her dam’s second Where’s Pedro litter, which included Bonnie Whelan, Double His Luck, Magic Match, Metung Machine, Metung Missile, Trophy Hunter and Your No Match, after her first litter by him, whelped in December 2007 produced Flying Diva, Game Hunter, Miss Mum, Strike The Match, Vee Bomber and Yantabulla Lad.

Miss Match also has winners on file from both of her other litters, a 100% winning litter whelped in December 2012 by Collision, which included Lakeview Harley and Tiger Whelan, who both won more than ten races, then a November 2013 litter, by Whelan, which had two named, Excited and Sam Whelan who were both winners, giving her an outstanding strike rate as a brood bitch.

She has one previous litter on file, two dogs and five bitches, whelped in November 2013 by Collision, with four named, Pippa Piper, Skate Thin Ice, Stem and Tyler’s Teddy with three of the four winning.

THREE litters on the NSW list this week by leading metropolitan sire, Magic Sprite (March 2008 Brett Lee x Glamorous) who is getting winners in all states of Australia as his prominence continues to go from strength to strength.

On the Victorian list he sits in third place with 82 wins, behind list leader Barcia Bale with 104 wins, then Cosmic Rumble with 82 wins and the way his offspring are going at the moment he will almost certainly finish second, and taking top spot in both states is still not out of the question.

Flying Liddy’s litter of four named included, Crazy Magic, Flying Wolfman and Trendy Magic, with their dam having two other litters on file, whelped in April 2005 by Collision and September 2009 by Westmead Lark*, who I have no details on.

Her career has got off to a flying start, with her first litter, whelped in September 2013, by Nitro Burst, producing Camjack Arrest, Crazy Nitro, Jammie Dodger, Maisy Mac, Strongbeth and the outstanding Group 1 winner Zambora Brockie.

She is from a litter of three which included Love Of Lauryn and Regal Lauryn, with their outstanding staying dam having eight other named offspring on file from three other litters, by Fear Zafonic*, Just The Best and Where’s Pedro, with seven of her 11 offspring competing at group level.

Our final litter for review this week, and the third Magic Sprite litter is one of one dog and seven bitches, registered by the King-King syndicate from Stratheden, from the well bred bitch, Sassy Giselle (April 2009 Knocka Norris x Proper Jessica), whose dam is by Proper Tears x Pretty Jacalyn (Star Title x Brindle County).

Proper Jessica has five other litters on file, by Big Daddy Cool, County Assassin, Elite State, Primo Uno and Regal Brett, with a total of 35 named offspring from seven litters. 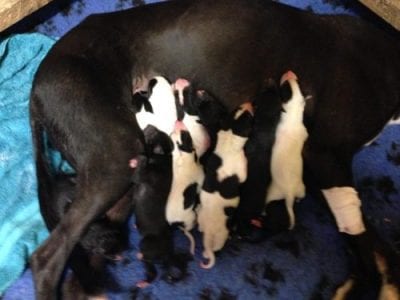 GOOD news from the mailbag this week, via an email from Victorian breeder, James Simpson regarding a litter of nine he has just bred, by international stud success Premier Fantasy* (April 2002 Premier County x Nifty Niamh).

She is from a 100% winning litter of ten named, which included Dark Jameson, Irish Breeze, Irish Connection, Malted, Mendes, My Master, My Superstar, Rennicane and Veetee Bomber.

She has since produced a handy third litter, whelped in December 2013 by Dyna Lachlan, which included Fill Up, Golden Malt, Greysynd Hope, Hoop Dreams, It Gets Better, Jay Jay Bee, Kallay and My Reason.

This really is a beautifully bred litter with her dam Irish Malt’s litter by Premier Fantasy* doing so well, the cross is already proven, then if you look at Aqua Vitae’s pedigree, with international stud success, Go Wild Teddy, Brett Lee, and Kiowa Sweet Trey* on both sides, I would be surprised if this litter does not create enormous interest.

Thanks for the email James and also for the great pic of Mum and the pups, good luck with this litter and also pass on our regards to your step father, one of greyhound racing journalism’s great contributors, Dennis Huxley.

SEVEN SHADOWS (Black & white dog, June 2014 Silver Jones* x Sophie’s Memory) Impressed with first start second over 595 metres at Sandown (SAP) on July 17, beaten 1.6 lengths in the race won by Erelda Bale (34.85) Big ask of a pup in his first start in a race. Trained at Kaleen by Elouise Glover, this pup has heaps of ability.

CHEERFUL SCOUT (Black bitch, December 2013 Oaks Road x Lady Grey) Trained by Dennis Pulis at Moe, she had 22 starts for one win and seven placings before her last start sixth over 595 metres at Sandown (SAP) on July 17, in the race won by Bel Air Mist (34.60). Her dam, Lady Grey was a top class staying bitch and with stayers often taking a bit longer to mature, she should run 715 metres and is a likely prospect.

BENNY THE JET (Black dog June 2014 Magic Sprite x Stranded) Five starts for two wins and a second, Warragul 460 metres and Sale 440 metres, before stepping up to 515 metres, from box at Sandown (SA) on July 17 in the race won by Mysterize (29.43) getting into all sorts of trouble at the first turn. Still has a bit to learn but he has a heap of ability. Trained at Garfield by Francis Kirkham he will improve sharply on that run if suitable boxed next start.

NEXT week we will have litters registered in South Australia in April, the Victorian Stud Service stats for March, and reviews of litters from Victoria, NSW, and South Australia.

We are particularly interested in hearing from Queensland breeders about their litters, after we still haven’t received any response from the authority there in regards to our request for information.