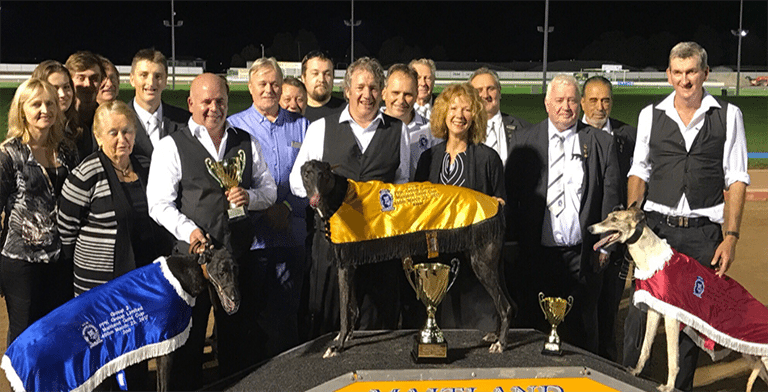 AUSSIE Infrared defeated one of the best fields the Hunter Valley has ever seen when capturing Thursday night’s Group 2 Maitland Cup (450m).

Trained in Victoria by Geoff Collins and Ros Hume, Aussie Infrared was only fairly away from box eight, but got plenty of room to muster speed, drawing level with fellow Victorian Pantera Nera (box three) around the turn.

In the charge to the line the black dog proved too classy, scoring by three-quarters-of-a-length in 24.94. Tasmanian contender Cosmic Heir (box five) ran on well to fill the trifecta, just under two lengths behind the winner.

Collins said his charge was drawn to perfection to win the final, but still had to overcome a few hiccups to land the $40,000 prize.

“You are never confident in these races – you can be confident in your dog’s ability – but you also are aware that you have to beat some really good dogs and it doesn’t always pan out the way you want,” Collins told Australian Racing Greyhound.

“He did a few things wrong – he missed the start which I think was caused by a few things in combination including the travel and the fact that he got a bit worked up heading to the boxes.

“We didn’t do much with him during the week because of the long distance we had to travel – so maybe he was a bit too fresh and that’s why he got so worked up.”

Thursday’s race was the third group race final of Aussie Infrared’s career, having previously qualified for the Group 2 Healesville Cup and the Group 2 Geelong Cup.

The victory took the underrated sprinter’s record to 18 wins and seven minor placings from 32 starts, with his prize money earnings now in excess of $90,000.

“He flies under the radar a lot – but it’s not the be all and end all that he doesn’t get the accolades – we still take a lot of pride in him,” Collins said.

“For us he has had 17 wins from 23 starts – and now he has won a group 2 so I think he will probably get some recognition from now on.”

Owned by the Us Forces syndicate which includes Collins and the dog’s breeder Michael Eberand, the Wattle Flat conditioner concedes he is relieved Eberand talked him into training the son of Bella Infrared and Ebby Miss.

“Mick sent him down to give him a handslip before last year’s Launching Pad but he pulled up a little bit stressed after the run and we decided not to put him in because he wasn’t quite right.

“A few days later Mick said he would leave him in Victoria for us to train – but at first I wasn’t very keen because I had enough of my own dogs.

“But Mick managed to talk me into it and the rest is history.”

“For the moment we will probably just focus on the big turn tracks,” he said.

“He hasn’t been jumping as well lately because he has been getting worked up so we just want to get to the bottom of that – he is an extremely keen dog.

“At one stage he will probably have a go back on the two turns but for now we have got the Warrnambool Cup coming up in four weeks and a heap of other suitable races down in Victoria.”

It was also an especially rewarding win for Collins, who is the stud master who formerly made available the American-sire Bella Infrared for the Australian market prior to his passing.

Collins said with his father no longer available at stud, Aussie Infrared will likely be given the chance to continue his legacy down the track.

“It’s a shame that Bella Infrared died two years ago because he has just been a revolution at stud.

“Given that his father is no longer around I have had a few people asking whether Aussie is available to use so I would say he will probably get a shot at stud.”